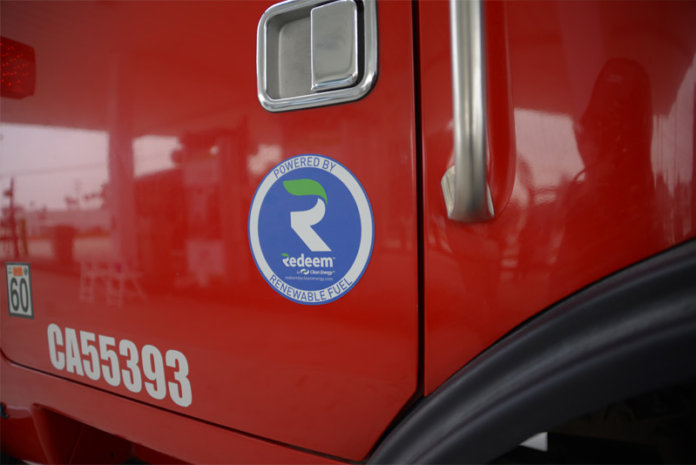 Clean Energy Fuels Corp. has announced a goal to transition to a 100% renewable natural gas (RNG) portfolio by 2025.

Clean Energy is committed to reducing the carbon intensity of its fuel portfolio to zero-carbon by 2025. This is 20 years ahead of California’s 2045 goal of transforming the state’s power supply to 100% renewable energy. (Zero-carbon is based on the average carbon index score – approved by the California Air Resources Board (CARB) – of Clean Energy’s fuel supply portfolio.)

Clean Energy has established a goal of expanding its Redeem renewable fuel offering to all of its stations and its customers’ stations by 2025.

The company has established a goal of reducing its company-wide carbon footprint by 25% by 2025.

“In 2014, the first full year it was available, Clean Energy delivered more than 20 million gallons of Redeem to our stations, which represented seven percent of our overall fuel mix,” says Andrew J. Littlefair, president and CEO of Clean Energy. “Last year, we delivered 110 million gallons of Redeem, which represents 53 percent of the RNG delivered in the market today. This demonstrates a significant growth in demand by our customers as they see switching to RNG as an economical and easy way to meet their own sustainability goals. Clean Energy’s own corporate vision is directly tied to reducing the impact of harmful emissions from the transportation sector, and as such, we have committed to delivering carbon-free Redeem to all of our customers by 2025.”

“Renewable natural gas is a more immediate and affordable solution to achieving zero-carbon emissions in the transportation industry, and it’s well ahead of the advancement of electric trucks,” adds Ashley White, Clean Energy director and head of sustainability. “Clean Energy is committed not just to sourcing the cleanest fuel available but being the fastest to get to zero-emissions.”

In response to the growing number of fleets requesting Redeem, Clean Energy has entered into agreements with BP and others to secure an increased supply of RNG. This should enable the stream of Redeem to rapidly grow over the next several years, the company says.

The corporate sustainability report was prepared according to Global Reporting Initiative standards. Clean Energy will continue to track the percentage and carbon index of its fuel portfolio according to the CARB Low Carbon Fuel Standard lifecycle assessment tool.