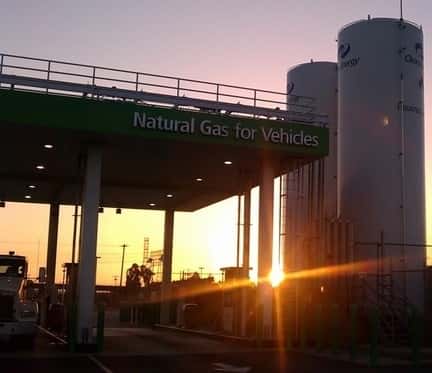 During a conference call this morning, Clean Energy president and CEO Andrew J. Littlefair and GE Oil & Gas' Mike Hosford, general manager of unconventional resources, described the collaboration as a ‘template’ for multiple MicroLNG plant deployments in the future.

‘This is not a one-off supply contract. It's truly a partnership,’ Hosford said.

These first two plants will use the MicroLNG platform – a modular solution designed to produce LNG anywhere on an existing gas distribution network – as a key piece of the fuel supply chain for America's Natural Gas Highway, Clean Energy's vision for more than 150 LNG refueling stations serving the long-haul trucking sector. More than 70 of these stations will be completed along major U.S. transportation corridors by the end of the year.

Littlefair remarked that the new facilities represent only the beginning of a substantial ramp-up.

‘These two LNG plants will be very important in the future,’ he said. ‘We're going to need billions of gallons of LNG.’

He referenced the case of natural gas use in the refuse truck sector to qualify his assertion. Back in 2008, the then-new 8.9-liter ISL G natural gas engine from Cummins Westport was starting to circulate. That year, 3% of new refuse vehicle purchases were natural gas models. Today, that figure is 55%.

The trucking sector is at a similar precipice with Cummins Westport's 12-liter ISX12 G, which is scheduled to enter production early next year. The ISX12 G is regarded as the right-fit platform for Class 8 trucks, and 2013 will be a year of testing – just as 2008 was the refuse sector's year of testing.

Littlefair's suggestion was to consider what the trucking segment could look like in 2017. What if natural gas commanded 55% of new truck purchases that year? The implication is that natural gas would need to accommodate a signification portion of the trucking sector's fuel needs – a market currently totaling about 30 billion gallons of diesel annually.

Using that rationale, he explained, it is not a stretch to believe that six or seven years from now, 5 billion to 6 billion gallons of LNG will need to be produced for on-the-road transportation applications alone. The two new MicroLNG plants that Clean Energy is deploying will initially produce up to 250,000 gallons per day, expandable to 1 million gallons per day.

Simple math suggests that two MicroLNG plants will not be sufficient. In turn, there will be room for more Clean Energy/MicroLNG units, as well as more LNG production from various other sources.

Right now, the sites of the first two facilities – which are expected to be operational in 2015 – are being determined.

‘We're already out in the field looking at locations,’ Littlefair said. He did not go so far as to name specific states or metro areas, but he noted that the upper Midwest and the Northeast are strong candidates for hosting the initial plants. After the locations are selected, it will take at least nine months to secure the necessary permits to begin construction.

In terms of financing, GE Energy Financial Services will provide up to $200 million to fund the two MicroLNG plants. GE Oil & Gas will providing turn-key process and plant construction services, from the liquefaction technology to the cryogenic storage system.

Photo by NGT News. The sun sets behind Clean Energy's LNG refueling station at the Port of Long Beach in California.