Each new truck features a chassis from Indiana-based Autocar and a RunWise hydraulic drive system from Ohio-based Parker Hannifin Corp. As Loveland explains in a press release, the hydraulic drive system uses a simple but high-tech mechanism that stores braking energy, then releases it to accelerate the vehicle to the next stop with much less reliance on the diesel-guzzling engine.

The city says its garbage trucks make 900 to 1,000 stops and starts on their daily routes, and the old trucks would suck up fuel at a rate of about 2.5 miles per gallon and wear out brakes with expensive regularity.

However, the city continues, the new hydraulic drive system promises to cut fuel consumption by 50% and ultimately save more than $15,000 per truck annually. The fuel savings will result in a carbon-dioxide reduction of 48 tons per truck per year, equivalent to taking 15 passenger cars off the road, the city adds.

Furthermore, the hydraulic system is expected to slash maintenance costs on brakes to a tenth of what the city currently pays annually for brake system replacement.

The city notes that cost and environmental benefits aren't the only perks: The new trucks also serve as rolling billboards for Loveland, as they are wrapped in a scenic photo of Lake Loveland reflecting peak fall foliage. 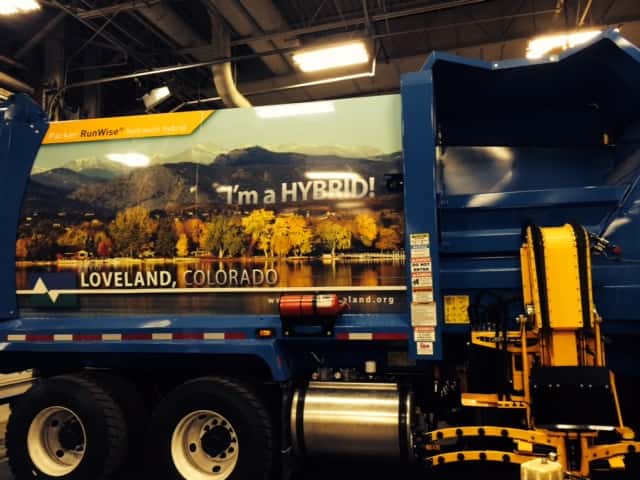 “These impressive vehicles are the result of the creativity of our employees who are committed to delivering cost savings and efficiencies in everything we do,” said Loveland Public Works Director Leah Browder. “Not only are these big blue trucks gorgeous, wrapped in a Loveland landscape, [but] they're also good for the budget and good for the environment.”

All costs of the vinyl wraps were borne by Parker Hannifin as part of the company's promotion of its product in a vast new territory, the Mountain West and Plains states.

The city says the $99,500 price tag for each hydraulic hybrid drive system, discounted by the manufacturer, will be paid for in the fuel and maintenance savings in 6.2 years. Thereafter, money saved during the trucks' 10-year life cycles will contribute to the Solid Waste Division's net cashflow.

Loveland Public Works employees also give the new trucks rave reviews, because the vehicles' performance involves smoother, less frequent and less jarring gear changes as the hydraulic mechanism does so much of the work.

“It's not as jerky, and it's much, much faster in the launch,” said Steve Kibler, Loveland's fleet manager. “It's a huge improvement to the way we're operating right now. More comfortable, better visibility, and much more driver-friendly.”

Photos courtesy of the City of Loveland, Colo.