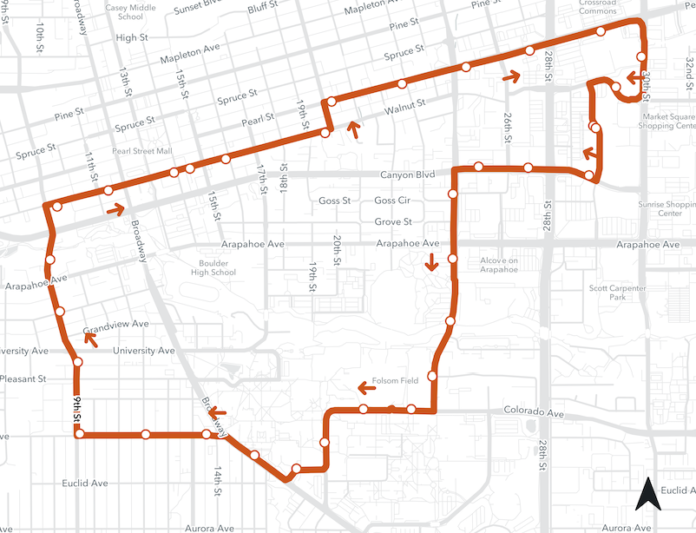 The city of Boulder, Colo., in partnership with Via Mobility Services, says it will soon introduce three new zero-emission electric buses for use on the local HOP route. The buses are currently being tested and are slated to be put into service in early April.

The new buses, manufactured in the U.S. by Proterra, a designer and manufacturer of zero-emission, heavy-duty electric vehicles, are 100% electric and emission-free and will be charged with solar energy. They feature quieter operation, can travel more than 200 miles on a single charge and are five times more fuel-efficient than standard diesel buses, with a fuel efficiency of 22.2 miles per gallon equivalent (mpg-e) compared to 3.5 mpg for the current diesel buses. The electric buses also have lower operating costs than diesel buses since they do not require maintenance of an engine or exhaust system.

Boulder and Via, which operates the HOP through a contract with the city, have the goal of electrifying the entire HOP fleet by 2030. The three new buses will join an existing electric HOP bus that was repowered from diesel to electric in 2018.

With transportation now the number one source of greenhouse gas (GHG) emissions in Colorado and the sector representing 29% of all GHGs in Boulder, the city adopted the GoEV City resolution last year, declaring support for transportation electrification across the community. The city aims to convert all transit and municipal vehicles to 100% electric by 2030 and reduce GHG emissions 80% by 2050.

Community partnerships are key to reaching these goals and the electric HOP buses join other local transportation electrification efforts underway. Boulder Valley School District recently introduced an electric school bus, which is the first of its kind in the state.

“Investing in a robust transit system – with a network of fast, frequent and affordable bus routes – is a cornerstone of our city, region and state’s transportation strategy to provide travel choices and reduce transportation emissions,” says Frank Bruno, CEO of Via. “Together, we’re moving our community forward to reach our climate goals.”

Funding for the three new HOP buses is made possible through Federal Transit Administration and Volkswagen Settlement grants administered by the Colorado Department of Transportation and partnership contributions from the Regional Transportation District, Via and the city. Boulder and Via continue to pursue grant funding opportunities for additional electric buses for the HOP fleet.