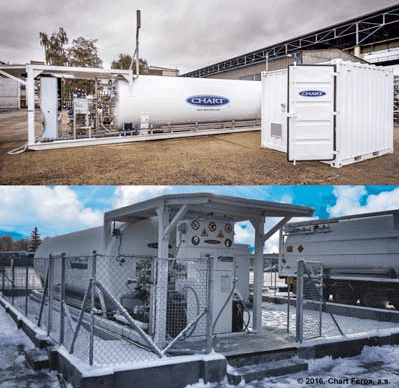 The company asserts that because the station is skid mounted, installation and commissioning are reduced to a few days; civil works are simplified, with significant cost savings; and the complete station can be easily relocated to another location, if required.

According to Chart Industries, this solution is ideal for vehicle fleet bases, remote locations and small ports, as well as being an excellent temporary fueling solution, either until a permanent station is built, or as a stop-gap until demand dictates a requirement for a larger, permanent station.

Initially launched 3 years ago, the skid-mounted LNG fueling station is in service in a number of European locations and current backlog includes an order from Prima LNG for two further stations, which will be installed in the U.K. for Calor Gas Ltd.