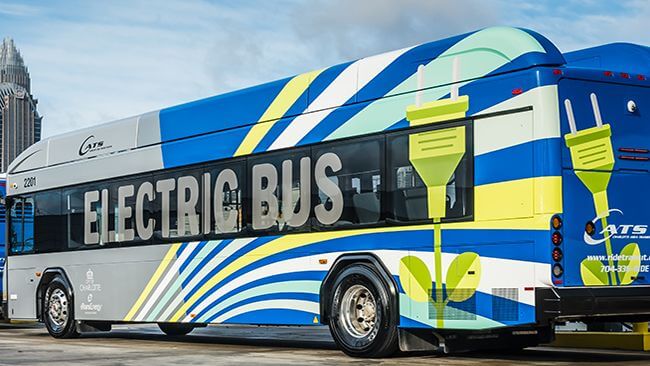 The Charlotte Area Transit System (CATS), together with the City of Charlotte and eTransEnergy, have launched a battery electric bus (BEB) pilot program. It electrifies a portion of CATS’ bus fleet, in preparation for a full transition to a zero-emissions bus fleet. The pilot program also allows CATS to collect data and assess vehicle performance while operating on identified City of Charlotte Corridors of Opportunity throughout the greater Charlotte metropolitan area.

The 12-18-month pilot program is part of a public-private partnership between CATS and eTransEnergy, a subsidiary of Duke Energy. The partnership was approved by Charlotte City Council in 2021 and CATS received its first BEB in December of that year.

“We appreciate working with CATS and the City of Charlotte to advance the city’s clean energy future,” says Brian Savoy, Duke Energy’s executive vice president and chief strategy and commercial officer. “Fleet electrification is a key component of our own clean energy transformation goal to reach net zero by 2050, and we look forward to working together on this pilot and eventually on newer and more exciting ways to lower carbon emissions here in our beautiful hometown.”

Over the course of the pilot program, CATS will receive a total of 18 BEB vehicles from two manufacturers: Gillig and New Flyer; they will have accompanying charging infrastructure from two manufacturers, ABB and Siemens, and workforce development training. CATS was awarded a Low or No (Low-No) Emissions Grant which is funding six of the 18 buses. The other 12 buses are funded through CATS’ Capital Investment Program.

The pilot program supports the Strategic Energy Action Plan, which sets a community-wide goal for Charlotte to become a low carbon city by 2050. The pilot program also received technical support through the Bloomberg Philanthropies American Cities Climate Challenge, an effort to resource cities to take strong action to reduce pollution that contributes to climate change and impact public health.

“We are doing something in Charlotte to be admired and praised,” says Charlotte Mayor Vi Lyles. “Our commitment to the Strategic Energy Action Plan really makes a difference. Our city fleet and facilities have a goal to be powered by 100 percent zero-carbon sources by 2030. That is really significant as a commitment to this community, and I know we have much more to do, but this is an important step.”

Charlotte Area Transit System (CATS) is a department of the City of Charlotte and governed by the Metropolitan Transit Commission. CATS is the largest transit system between Washington, D.C. and Atlanta, offering bus, light rail, streetcar, vanpool and paratransit services.