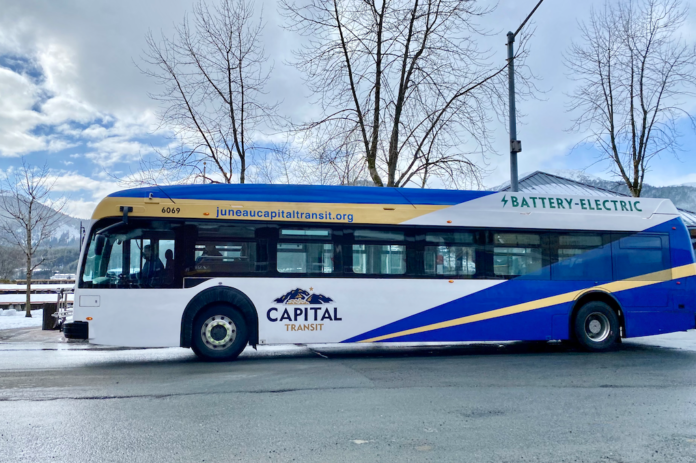 Capital Transit has added a battery-electric bus to its fleet – the first electric bus owned and operated by a public transit agency in Alaska.

“The City and Borough of Juneau (CBJ) is committed to bringing clean public transportation to its ridership and the community,” says Katie Koester, public works and engineering director of CBJ. “Capital Transit drivers and mechanics have been retraining to operate and maintain the new 40-foot long bus and to learn the nuances of its integrated battery management system. We have eliminated oil changes.”

The new bus will be servicing the Mendenhall Express route, which travels via Glacier Highway between the Downtown Transit Center and the Mendenhall Mall, which is the location of Capital Transit’s future transfer site.

Original funding for the electric bus came from the U.S. Department of Transportation Federal Transit Administration (FTA) through the Low- or No-Emission (Low-No) Grant Program. The program provides funding for state and local governmental authorities to purchase or lease zero-emission and low-emission transit buses. Funding was passed through DOT&PF and a matching grant was provided by the Alaska Energy Authority under the Volkswagen Settlement fund. Capital Transit already uses three electric cars as support vehicles – purchased through grant funding from DOT&PF.

The CBJ Assembly has set a goal of 80% renewable energy by 2045. The bus is another step toward that goal and, with the help of many supporters, Capital Transit says it has been successful in being awarded Low- and No-Emission grants for four consecutive years. CBJ plans to use those funds to replace seven 2010 diesel buses that are at the end of their useful life.