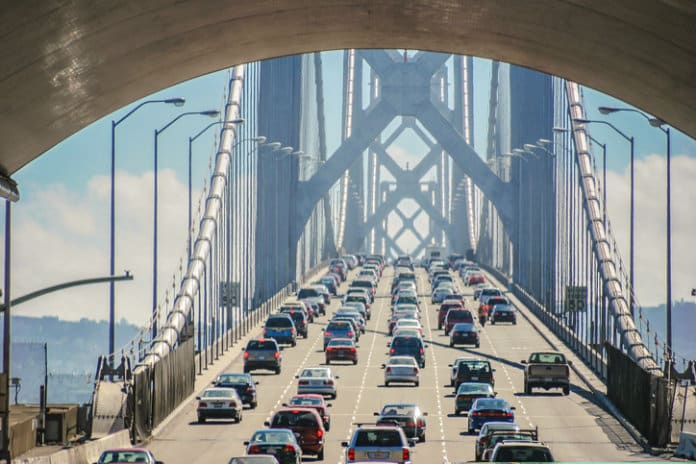 Greenhouse-gas (GHG) emissions continue to drop in California even as the state grows its economy and population. Further declines in GHG emissions are expected to come from the state’s transportation sector, according to the California Energy Commission (CEC).

In its latest tracking progress report on greenhouse gases, the CEC shows that the transportation sector directly accounts for 38% of GHG emissions in California. The graphic below shows California’s 2016 GHG emissions by end use:

Once refineries are included, transportation accounts for 50% of the state’s GHG emissions.

The report suggests that transforming California’s transportation system away from gasoline to zero-emission and near-zero-emission vehicles will be fundamental to reducing GHG emissions.

The focus on reducing GHG emissions intensified recently with Gov. Jerry Brown’s signing of an executive order to boost the supply of zero-emission vehicles (ZEVs) and charging and refueling stations in California. That executive order sets a new target of 5 million ZEVs in California by 2030.

The recently signed executive order will be crucial to California’s meeting its goal of reducing GHG emissions 40% below 1990 levels by 2030, which stems from S.B.32 in 2016. Although transportation accounts for the largest chunk of the state’s GHG emissions, data from the California Air Resources Board (CARB) shows emissions already dropping in that sector. The graph below identifies GHG emissions per capita and by sector: 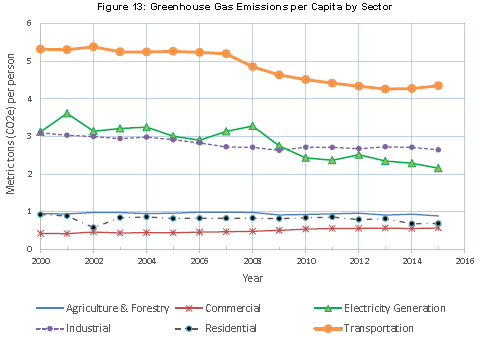 Since 2001, GHG emissions per person have dropped 19% in California, according to data from CARB. In 2015, emissions from routine emitting activities statewide were 1.5 million metric tons of CO2. (Note: California generates only about 1% of global emissions.)

In addressing its GHG emissions, California is proving that curbing emissions can coexist with a growing economy: While the state’s carbon pollution per million dollars of California gross domestic product (GDP) has declined 33% since 2001, its GDP has grown 37% between 2001 and 2015.

Editor’s note: This news item originally appeared as a blog post from the California Energy Commission.

Why the reduction in criteria and toxic air emissions isn’t the bigger and more important story is beyond me! California gets an “F” (failing grade) for its air cleanup efforts. According to recent research, as many as 21,000 Californians are yearly dying early from the effects of polluted air. Transportation is the largest contributor in state to deadly emissions. In the world, meanwhile, there is an estimated 1 billion serviceable motor vehicles and it appears transportation isn’t going to slow anytime soon. We need to figure out ways to make transportation less negatively impacting to the air and health through… Read more »