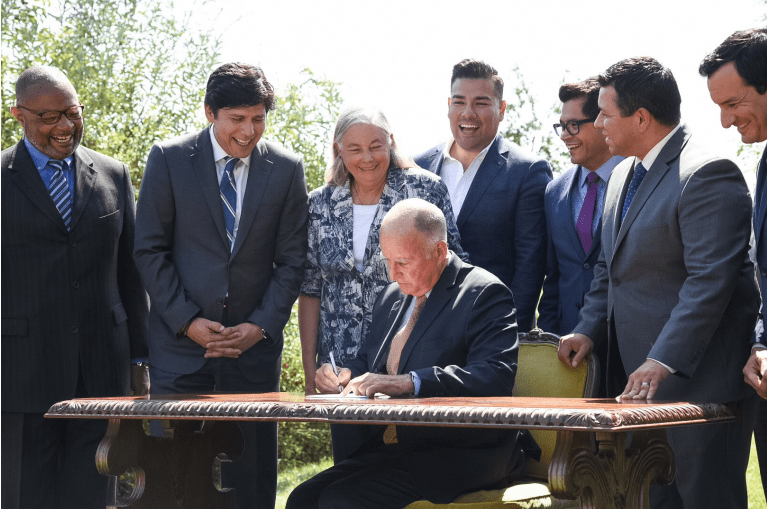 Gov. Jerry Brown, D-Calif., has strengthened California’s commitment to reducing greenhouse-gas (GHG) emissions, having signed S.B.32 by Sen. Fran Pavley, D-Agoura Hills, and A.B.197 by Assemblymember Eduardo Garcia, D-Coachella, which require the state to cut emissions at least 40% below 1990 levels by 2030 and invest in the communities hardest hit by climate change.

“Climate change is real, and knowing that, California is taking action,” said Gov. Brown. “S.B.32 and A.B.197 are far-reaching moves that continue California on its path of vast innovation and environmental resilience.”

According to the governor’s office, Gov. Brown signed the legislation from the Vista Hermosa Natural Park, a 10-acre urban wilderness project built atop an old oil field and the first public park built in more than 100 years in the densely populated western edge of downtown Los Angeles.

“With its Clean Car Law in 2002 and the Global Warming Solutions Act in 2006, California took a global lead in adopting policies to clear the air, transition to clean energy and reduce climate pollution,” said Sen. Pavley. “Those policies have fueled billions of dollars in private investment and spawned a thriving clean energy sector. S.B.32 sends an unmistakable message that California is resolute in its commitment to remain on that healthy and prosperous course.”

“In order for California to remain an economic and environmental leader, the state will need to also be a trailblazer on issues related to equity,” said Assemblymember Garcia. “Placing the health and economic impacts of climate policy on vulnerable populations second will stunt the state’s prosperity.”

A.B.197 establishes a legislative committee on climate change policies to help continue to ensure the state’s actions to reduce GHG emissions are conducted with transparency and accountability.

“S.B.32 extends California’s landmark greenhouse-gas reduction goals. A.B.197 changes the game on how we make sure those goals are reached,” said Assembly Speaker Anthony Rendon. “The successful effort behind these two bills is the latest sign of a growing consensus that protecting the environment and improving public health are inextricably linked and that maintaining that link is key to advancing future environmental actions. The assembly, where A.B.32 was passed 10 years ago, will be vigilant and vigorous in making sure California’s climate change goals are met – and are met as we all intended.”

Last October, Gov. Brown signed landmark legislation – S.B.350 – to double the rate of energy-efficiency savings in California buildings and generate half of the state’s electricity from renewable sources by 2030. Gov. Brown also committed to reduce today’s petroleum use in cars and trucks by up to 50% within the next 15 years; make heating fuels cleaner; reduce the release of methane, black carbon and other potent pollutants across industries; and manage farm and rangelands, forests, and wetlands so they can store carbon.

For the full text of the bills, click here.