Home Up Front Calif. Governor Plans to Cut In-State Petroleum Use in Half by 2030 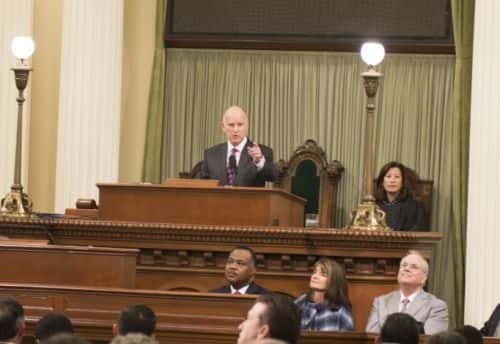 Gov. Jerry Brown, D-Calif., wants to reduce California's petroleum use in cars and trucks by up to 50% within the next 15 years.

Brown was sworn in for a fourth term as governor earlier this week, and he used his inaugural speech to outline his ambitious priorities for the future. The focus on petroleum is part of a three-point plan to cut carbon emissions in the state by 2030. The other components include increasing the state's renewable energy usage to 50% and doubling the efficiency of existing buildings.

Brown also said he envisioned a variety of initiatives ahead, including ‘millions of electric and low-carbon vehicles.’

“Taking significant amounts of carbon out of our economy without harming its vibrancy is exactly the sort of challenge at which California excels,” he said about his goals. “This is exciting, it is bold, and it is absolutely necessary if we are to have any chance of stopping potentially catastrophic changes to our climate system.”

The governor did not, however, provide specifics during his speech about how he plans to realize his carbon-cutting initiatives.

“How we achieve these goals and at what pace will take great thought and imagination mixed with pragmatic caution,” he noted.

Over the years, Brown has been an avid supporter of cleaner forms of transportation. In March 2012, for example, the governor called for 1.5 million zero-emission vehicles to be on California's roadways by 2025. He also signed several bills boosting the alternative fuel vehicle industry, such as A.B.8 and S.B.359 in 2013 and S.B.1204 in 2014.