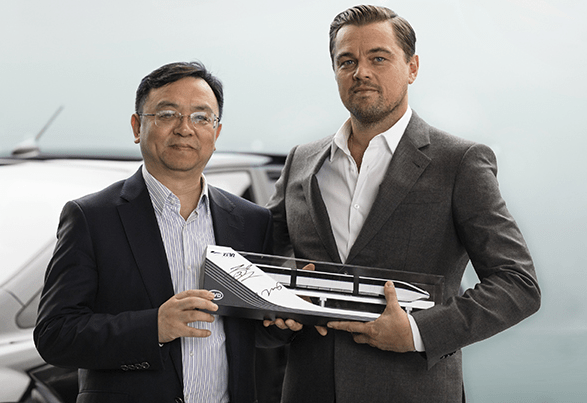 BYD Co., one of the world’s largest electric vehicle companies specializing in battery technology, has announced that Leonardo DiCaprio, the UN Messenger of Peace and Academy Award-winning actor, will serve as the new brand ambassador in China for BYD’s line of new energy vehicles.

According to BYD, the commitment to new energy vehicles is part of BYD’s “Cool the Earth by 1°C” campaign for the creation of a “Zero Emissions Energy Ecosystem” – comprising renewable energy generation, storage and usage – which looks to transform how the individual uses energy and to promote public awareness of climate change.

BYD Brand and Public Relations General Manager Sherry Li comments, “Mr. Leonardo DiCaprio has greatly inspired the world with his outstanding dedication to saving the planet’s ecological environment. As our brand ambassador in China, we are pleased to work with him in promoting public awareness of climate change through the use of new energy vehicles.”

Since 1998, LDF has awarded over $61 million to 128 different projects in 46 countries and all five oceans. In recognition of his efforts, DiCaprio was awarded the title of “Messenger of Peace” by United Nations Secretary-General Ban Ki-moon in 2014.

“All over the world, people are realizing that cars that run on fossil fuels are inefficient and a major threat to the planet. I am very pleased to be joining an effort to increase the number of clean vehicles on the road in China and beyond,” says DiCaprio.

Through the partnership, DiCaprio will work closely with BYD throughout 2017 to highlight new developments and announcements in China regarding the company’s line of new energy vehicles.

BYD’s electric bus and other new energy vehicles have expanded their footprint to 240 cities, across 50 countries and six continents. In the first half of 2016, BYD saw a 130% increase in new energy vehicle sales, allowing the company to strengthen its hold on the Chinese plug-in vehicle market, claiming a 65% share.