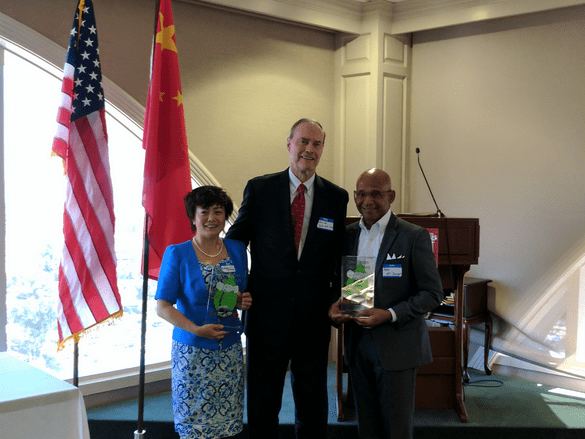 “BYD is very proud to accept this award – but we’re even more proud to have our buses on the streets of Long Beach,” says Stella Li, president of BYD America. “Bringing jobs to Southern California while making the air cleaner is one of the ultimate win-win situations, and I thank LBQA for this new tradition of honoring partnerships that protect the environment and grow the economy.”

In April 2015, LBT’s board of directors selected BYD as its vendor to bring electric buses to the City of Long Beach and the 12 other cities the transit agency serves. The program includes 10 battery-electric buses (and the option to buy 14 more), as well as a wireless charging system for opportunity charging en route.

LBT officials expect to have their battery-electric buses in service by the end of next month and intend to have the Passport route – a loop running from downtown Long Beach to waterfront attractions such as the Aquarium of the Pacific and The Queen Mary – operated 100% by battery power.

BYD has more than 10,000 battery-electric buses in operation around the globe, running on six continents and saving customers more than $38 million in fuel and maintenance costs. BYD America is headquartered in downtown Los Angeles, and the company assembles buses at its manufacturing facility in Lancaster, Calif.