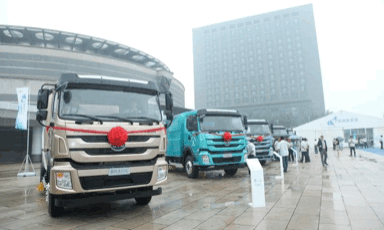 BYD Co. Ltd., an electric vehicle (EV) manufacturing company,  says it has partnered with the Beijing Environmental Sanitation Engineering Group Ltd. to launch a new series of pure electric sanitation trucks – featuring a total of 26 different models – in an effort to achieve a fully electric-powered fleet by next year.

Specifically, BYD says that the Beijing Environmental Sanitation Engineering Group is expected to replace 45% of its current diesel fleet with pure EVs before the end of this year and to be completely electric-powered within 2017.

A grand opening ceremony was held at the Beijing Convention Center on Aug. 18 to celebrate the companies’ partnership and the launch of what BYD is calling the world’s first pure electric sanitation truck lineup.

The 26 models of pure electric trucks – with load capacities ranging from 1 ton to 32 tons – will serve the city’s administration and carry out multiple tasks, such as sweeping, collecting, compressing and transporting waste, as well as refrigerated transportation for hazardous waste. The truck lineup will cover all operational processes, including collection, transportation and disposal.

Last September, a fleet of 22 BYD T8 pure electric 16-ton sweeping trucks prepared the way for the Tiananmen Square Parade celebrating the 70th Anniversary of the end of World War II, and following the ceremony, those 22 trucks continued to serve the city. BYD says the Beijing Environmental Sanitation Engineering Group saw the many benefits of such vehicles, including the low noise, zero emissions, efficiency, long driving ranges and lifetime batteries, and set up a joint venture solely dedicated to manufacturing pure electric sanitation trucks.

Shortly afterward, the State Council made an environmental announcement, demanding larger fleets of electric sanitation and logistics trucks be adopted.

In addition to the BYD Iron-Phosphate Battery, the lineup is equipped with several other BYD core technologies – for example, the electric integrated axle assembly technology, which combines the driving motor with the automatic gearbox and drive axle, largely improving transmission efficiency. At the same time, the integrated technology saves extra room for more batteries. Furthermore, with its Vehicle to Vehicle feature, the truck can be used as a charging unit to serve other trucks in need of charging.

The vehicles can be fully charged in 2 to 3 hours for a driving range up to 400 kilometers or eight hours’ heavy-duty operation.

BYD says it will continue its relationship with the Beijing Environmental Sanitation Engineering Group and work together to not only improve the air quality in Beijing and adjacent areas, but also push the entire sanitation industry to upgrade and reach higher levels of industrial development.