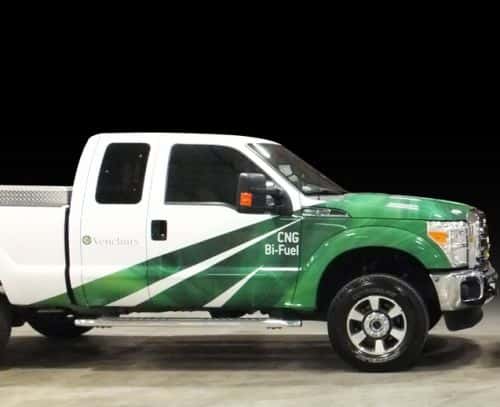 Last week during the ACT Expo, I had the opportunity to test-drive a converted Ford F-350 compressed natural gas (CNG) bi-fuel pickup from Venchurs Vehicle Systems. The company's CEO, Jeff Wyatt, told me he wanted to put the trucks in people's hands to assess the bi-fuel's performance, and I was happy to oblige.

Well, the ride in the converted F-350 was completely uneventful. And that's exactly how it's supposed to be.

As increasing attention turns to alternative fuels, fleet operators and the general public are interested not only in cost, but also in drivability. If the economics of a fleet conversion make sense, the next consideration is inevitably whether these vehicles hold up when put to work.

With the Venchurs bi-fuel, I tried to recreate that experience under ordinary, real-world conditions. I headed east from Long Beach on the Pacific Coast Highway – the wind whipping by my ears while the crash of the sea echoed in the distance.

Anyone who has been in this part of California knows that this description is romanticized. Rather than sweeping curves on a jagged coastline, this portion of the Pacific Coast Highway features mostly straight and flat runs interrupted by stoplights every 500 yards: certainly one type of ordinary, real-world conditions.

When running on gasoline, the F-350 accelerated from a dead stop about as quickly as a 6.2-liter, 385 hp V-8 could possibly move five tons. (Remarkably peppy, actually.) Upon punching the pedal while in CNG mode, I found that the response and acceleration were the same, both on flat terrain and uphill.

Similarly, the truck had sufficient get-up-and-go when accelerating from low speeds and low RPMs to highway speeds, whether burning gasoline or CNG. Meanwhile, the vehicle handled very well for a machine with a 137-inch wheelbase, and the six-speed automatic provided seamless shifting.

Speaking of seamless, questions often arise about how well bi-fuel systems switch from gasoline to CNG and vice versa. This is an understandable concern, considering the importance of drivability.

When the highway finally afforded me enough unmolested tar to make it through the gears and get cruising in the F-350, I manually clicked from CNG to gasoline and back again several times. Obviously, I knew the change was coming, and it was still almost imperceptible. The same held true when switching between fuel types when the truck was at an idle.

For its part, Venchurs is a Ford Motor Co. Qualified Vehicle Modifier, so the bi-fuel models keep the standard Ford warranty following a conversion, and all the on-board diagnostics functionality is maintained. Venchurs performs the conversions at its facility in Michigan.

And in terms of the bi-fuel pickup's range, the 35-gallon gasoline tank and 21.2-gasoline-gallon equivalent CNG tank reportedly yield a combined range of 650 miles.

Unfortunately, I did not get a chance to trek hundreds of miles to the best parts of the Pacific Coast Highway and verify that figure.