The plug-in vehicle battery market, which is currently being led by Tesla, China’s BYD and Volkswagen, is expected to rise to $10 billion in 2020, with electric vehicles (EVs) emerging as the drivetrain of choice, according to a recent report from Lux Research.

Among battery-makers, Panasonic will keep its lead with a 46% market share, followed by BYD, LG Chem, NEC, Samsung SDI and others, Lux adds.

“Plug-in adoption is ultimately being fueled by rapidly decreasing battery costs and the success of early EVs, such as Tesla’s Model S and Nissan’s Leaf, which has forced a number of other OEMs to make more serious commitments to developing plug-in vehicles,” says Chris Robinson, Lux Research associate and lead author of the report, which is titled, “Segmenting the $10 Billion Battery Market for Plug-in Vehicles: Market Share Projections for OEMs, Individual Models, and Suppliers.”

“Consumers will soon be able to purchase electric vehicles with 200 miles of range for less than $40,000 – almost half the price of the long-range EVs available today,” he adds.

Lux Research forecasted the market for approximately 90 plug-ins and fuel cell vehicles and identified implications for the energy storage industry. The company released the following graph to demonstrate its projected market demand from the top EV makers over the next four years: 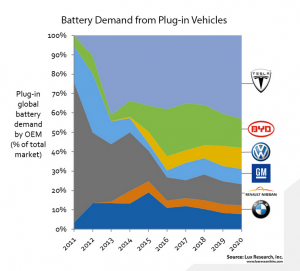 Among the study’s findings are the following:

Volkswagen’s forecasted growth makes sense, as the VW group has promised to introduce up to 30 new electric models and build between 2 million and 3 million all-electric cars each year by 2025, following its recent emissions scandal.

Lux adds that this report is part of the Lux Research Energy Storage Intelligence service.

We love the EV opportunity; however, as we understand it there has been a issue with Utility Rates and specifically the Demand charges, which can be prohibitively costly for EV Bus Transportation operators, particularly when fast charger utilization occurs with the Proterra Infrastructure. As we understand it, Proterra and Foothill Transit were part of a pilot project whereby a Decision by the CPUC has waived the Demand fees for 3 years due to this issue. This is a important topic that is a emerging critical barrier with Grid Tied Fast charging and Fleets cannot get around it if they use… Read more »