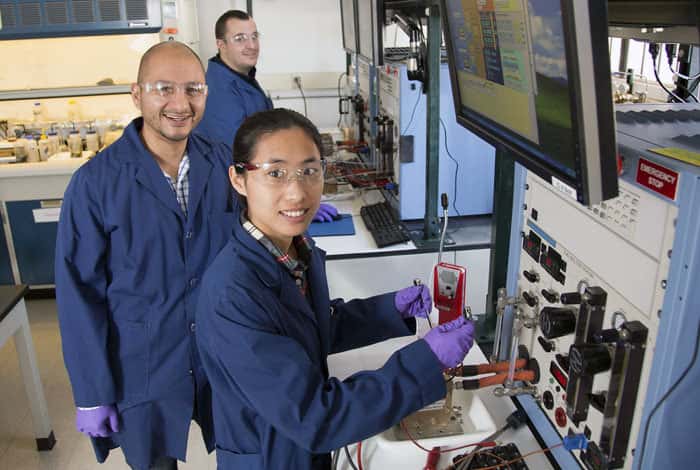 Researchers at the U.S. Department of Energy’s Argonne and Los Alamos national laboratories have teamed up to support an initiative called the Electrocatalysis Consortium (ElectroCat), a collaboration devoted to finding an effective but cheaper alternative to platinum in hydrogen fuel cells.

ElectroCat is dedicated to finding new ways to replace rare and costly platinum group metals in fuel cell cathodes with more accessible and inexpensive substitutes – such as materials based on the earth-abundant metals iron and cobalt.

The heart of the automotive fuel-cell power system is the fuel cell stack, which is where the platinum is used. About half of the total cost of a typical automotive fuel cell stack comes directly from the cost of the platinum metal in the electrode catalysts. “Platinum is a precious metal, which means that it is both expensive and difficult to get,” says Piotr Zelenay, a Los Alamos National Laboratory fellow and lead scientist on the Los Alamos component of the consortium.

“In order to make hydrogen fuel cell cars an affordable reality, we need to find a way to either significantly reduce the amount of platinum needed or completely replace platinum with less expensive materials,” adds Debbie Myers, an Argonne senior chemist who will serve as the Argonne lead in the consortium.

“The challenge for us and for the industry is to develop new catalysts that meet targets for activity, durability, cost and ease of integration into membrane electrode assemblies,” adds Zelenay. “Thankfully, the national laboratory system includes the people who have the skills to address these issues.”

The partnership between Argonne and Los Alamos that forms the core of ElectroCat involves the study, creation and implementation of possible alternatives to platinum-based electrodes. The development efforts are headed by Los Alamos and accelerated by the high-throughput, combinatorial, characterization and electrode performance modeling capabilities at Argonne, as well as by applying a high-performance supercomputer to model new catalyst structures at Los Alamos.

Once the potential replacement candidate materials are identified, scientists in the consortium can examine materials using a number of different methods, including X-ray imaging and spectroscopy techniques at Argonne. Argonne researchers can also investigate samples in a number of different environments that replicate how they would function in real-world scenarios.

By combining the expertise and capabilities at Argonne and Los Alamos, in partnership with the private sector and universities, researchers expect to accelerate the development and implementation of platinum-free catalysts in fuel cells.