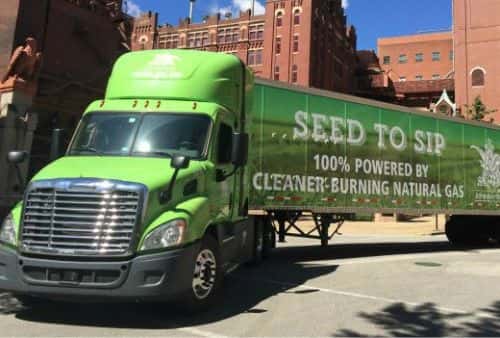 Anheuser-Busch has announced it replaced all 97 diesel-fueled tractors in its St. Louis fleet with new compressed natural gas (CNG)-fueled tractors. By transitioning to the CNG technology, the brewing company says it expects to reduce carbon dioxide emissions by 2,500 tons per year.

“Transitioning our entire St. Louis tractor fleet to CNG-powered engines brings environmental benefits directly to our company and our community,” says James Sembrot, Anheuser-Busch's senior director of transportation. “A conversion of this scale is indicative of the commitment we've made to deploying more sustainable technologies and processes at each stage of the brewing process – from “Seed to Sip.',”

Anheuser-Busch's St. Louis brewery is one of the company's largest facilities, served by a fleet that travels 11 million miles annually throughout the Midwest. The company says the abundance of natural gas filling stations, combined with the fleet's high mileage, made the company's hometown of St. Louis a strategic choice for the conversion.

‘I want to thank Anheuser-Busch for setting an example for businesses across the city by committing to environmentally friendly business practices,’ comments St. Louis Mayor Francis Slay. ‘With Anheuser-Busch identifying and implementing sustainable alternatives, the company is helping to reduce greenhouse gas emissions and make St. Louis a better place for all of us to live, work and play.’

Anheuser-Busch notes the new CNG fleet comes as the 2015 football season kicks off, one of the St. Louis brewery's busiest shipping periods of the year, and the company expects the CNG tractors to ship approximately 31 million cases of beer this fall.

The new Freightliner-produced CNG tractors will be filled at a recently opened CNG station operated by U.S. Gain, near the St. Louis brewery. Amerit will provide maintenance support at a nearby facility, recently retrofitted to accommodate the new CNG fleet. J.B. Hunt, a transportation provider, will continue to manage Anheuser-Busch's St. Louis dedicated fleet of tractors and drivers. Agility will provide the new CNG fleet with logistical support, and Element will oversee tractor leasing.

Part of Anheuser-Busch's “Seed to Sip' environmental commitment, the St. Louis CNG fleet conversion furthers a global initiative to reduce logistics-related carbon emissions by 15% through 2017. Parent company Anheuser-Busch InBev has made similar fleet conversions in China, Europe and Brazil as part of an effort to reduce carbon emissions globally across facilities.