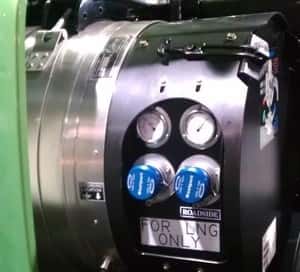 The market for components and technologies that enable conventional on-road vehicles to store and consume natural gas fuels has grown in step with a steady increase in the use of natural gas as a transportation fuel. Indeed, natural gas vehicle (NGV) component production has proliferated recently worldwide and greatly increased the value of the associated markets.

Today, CNG is the most prevalent form of natural gas fuel for transportation. By volume equivalent, CNG fuel at 3,600 psi yields approximately 70% less energy than gasoline and 73% less energy than diesel. So, with CNG's lower energy density, the driving range of a dedicated CNG NGV is generally less than a gasoline or diesel vehicle with comparable fuel storage space.

Right now, LNG is used by less than 1% of the global NGV fleet. However, because LNG's energy density is superior to CNG's, LNG is being increasingly considered as a natural gas transportation fuel. Also, fuel tanks can generally carry more LNG than CNG, and that LNG can be stored for as many as 10 days before any appreciable evaporation occurs.

The immediate market value and opportunities presented by global NGV growth (which is being driven primarily by fleets) is found with the vehicle components integral to both vehicle conversions and OEM/factory production of NGVs.

The shared drivetrain and various systems between NGVs and conventional gasoline- and diesel-powered vehicles allows NGVs to be manufactured in major automotive factories or converted in the aftermarket through vehicle system additions. Major vehicle features needed for natural gas consumption that are not found in conventional vehicles include the following:

CNG is stored in vehicles at pressures above 3,000 psi, making it unsuitable for storage in any liquid fuel tank. The high-pressure gaseous fuel is dispensed into on-board storage cylinders at the rated service pressure.

All-metal Type I cylinders are the most prevalent storage media in the global NGV market, with a near monopoly on light-duty (LD) and passenger-car NGVs in developing economies. Composite cylinders (Type II-IV) are more prevalent in the worldwide NGV population among medium-duty (MD) and heavy-duty (HD) vehicles (over 10,000 pounds in gross vehicle weight).

Less than 1% of MD and HD NGVs worldwide currently use LNG fuel dispensed and stored on board in a liquid form. LNG is a highly refrigerated liquid (-220 degrees F) at low pressure (70 psi). Onboard LNG fuel temperatures are maintained through a layer of insulation wrapped around an inner vessel and enclosed by an outer vacuum vessel. Stainless steel is used in the inner insulated vessel for its low temperature strength and also in the outer vessel for impact resistance.

NGV cylinder production in 2012 will be approximately 3.2 million units, or roughly half a million more than in 2008 (2.7 million). Cylinder production is projected to approach 16 million units by 2022. The greater share of OEM models in the global LD NGV market will accelerate the production of cylinders on a unit basis, with smaller cylinders using more composites being increasingly pursued by NGV OEMs.

Global NGV storage cylinder market value is also impacted by material usage, with more sophisticated cylinder designs and composites driving costs. Total market value for NGV natural gas fuel storage cylinders is projected to rise by a CAGR of 16.7% between 2012 and 2022, outpacing the 10.5% CAGR of the global NGV population. Higher rates of growth in MD/HD bus and truck populations and increasing use of composites in NGV cylinder design represent leading drivers in this market's growth beyond greater volumes of cylinder demand.

Between 2012 and 2022, the global NGV storage cylinders market will rise by $4.5 billion to reach approximately $5.8 billion.

Depending on the features and complexity of the existing fuel system, the fuel delivery system kit can represent the greatest component cost of the NGV vehicle system. However, component standardization in the kit and the use of multiple or composite cylinders commonly places fuel storage as the most expensive component. In the case of larger vehicles, labor, engine modification and the fuel storage system represent the majority of costs.

The global market for NGV on-board fuel delivery systems is projected to increase from approximately $890 million in 2012 to $4.6 billion in 2022 (CAGR of 17.9%). Strong OEM LD NGV markets in Europe and Asia-Pacific contribute to the regions' combined 58% share of the total 2008-2012 historical market for NGV fuel systems.

Europe's development into the second-largest regional market for NGV fuel systems in 2022 (at $633 million) will be achieved through the sales of more complex HD fuel delivery systems used in the European trucking population and the strong market representation of OEM LD NGVs in the region. Likewise, Asia-Pacific will see market gains through increased OEM production of MD/HD NGVs, but also from expanded factory production of natural gas passenger cars.

Dedicated natural gas engines are manufactured by engine OEMs for the efficient vehicular consumption of natural gas and to provide performance equal to that offered by diesel engines. Factory-model MD and HD NGVs (such as transit buses, delivery vehicles, other service vehicles and trucks) are commonly fitted with dedicated NG engines.

Higher-displacement on-road engine markets will undoubtedly be affected by Westport Innovations' introduction of high pressure direct injection (HPDI) technology. Engines with HPDI use natural gas as the primary fuel and diesel for a small percentage of consumption (by energy).

Dedicated natural gas engines represent the greatest component cost of an NGV, significantly more than fuel storage cylinders or fuel delivery system. The high cost of dedicated engines can drive profound market growth in terms of value, with even limited penetration in some regions contributing to a projected nearly $7.5 billion market by 2022.

The global market for on-road dedicated natural gas engines has more than doubled, from $351 million in 2008 to $784 million in 2012 (CAGR of 22.3%). With an approximate 60% share of the 2012 global market, Asia-Pacific leads all regions, on the strength of OEM bus sales in China and emerging natural gas trucking fleets in several countries. For instance, China is home to a NGV truck market that is expected to make a 50% gain in 2012 over 2011.

North America is the second-largest regional market for dedicated natural gas engines, with $185 million in sales expected for 2012. The remaining regional markets account for roughly 17% of the 2012 global market.

Closing out 2012 at $2.9 billion, the global NGV components market has been unhindered by sluggish top-level growth in the global automotive market, as it has dramatically outperformed general vehicle sales growth and recovery in several regional markets. With diverse sources of growth worldwide, the global NGV components market has grown by at least 3% since 2009, even through the collapse of pivotal markets in Pakistan and Iran and recent struggles of the Indian market.

Specifically, dedicated natural gas engines designed for improved efficiency and power over converted engines not only represent the greatest contributor to the global NGV components market, but can also guide future growth higher by improving customer and owner experience with operating and maintaining NGVs by demonstrating reliability and reduced costs over converted NGVs and diesel vehicles.