Home Up Front Alternative Fuels: What’s Going on in Washington? 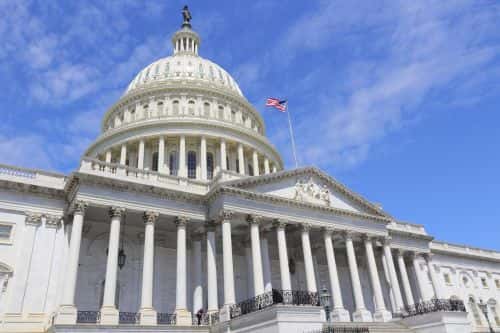 A new Congress is in session in Washington, D.C., this winter, and alternative fuel vehicle industry stakeholders are anxious to see how a fresh complement of lawmakers will influence the short- and long-term policy landscape.

Experts and advocates from various industry segments – natural gas, propane autogas, electrification and biofuels – gathered in the nation's capital Monday during Energy Independence Summit 2015 to discuss legislative developments, and the overall sentiment could likely be best described as guarded optimism.

Matthew Godlewski, president of NGVAmerica, pointed to one particularly good sign that, just maybe, Congress is ready to break through a state of stalemate and make progress. Just a few weeks ago, the Senate Finance Committee passed legislation that seeks to remedy the taxation disparity for liquefied natural gas (LNG), and NGVAmerica anticipates that House members could introduce as many as four companion bills soon.

“We're very optimistic that this Congress is going to be motivated,” he said. “Already, we're seeing cooperation.”

Genevieve Cullen, the interim president of the Electric Drive Transportation Association, is similarly encouraged by some of the early signs coming from Congress, but she also noted that there are roadblocks on the way toward progressive transportation-energy policy.

“You're facing a Congress that is increasingly skeptical of bridging the gap between R&D and commercialization,” Cullen remarked, adding that the currently low prices for gasoline and diesel are “blunting the enthusiasm” that some lawmakers have had for pushing various alt-fuel incentives.

Two important incentives, for instance – the federal $0.50/gallon alternative fuel excise tax credit and 30% alt-fuel infrastructure credit – are currently expired and awaiting extensions. The fate of these and other incentives depends largely on Congress' appetite for passing spending measures and ability to work across the aisle – both of which are uncertain.

It is doubtless, however, that the existence of predictable policy – or the lack thereof – is a linchpin for the alt-fuel vehicle sector.

“Fleet decisions are long-term decisions,” said Phillip Wiedmeyer, chairman of the Alabama Clean Fuels Coalition and vice president of conference organizer Transportation Energy Partners (TEP). He noted that, as an example, TEP is advocating for a five-year extension of the alt-fuel excise-tax and infrastructure credits.

“Some sort of three- or five-year extension of both of the credits would be wise,” Godlewski added.

Phil Squair, senior vice president of public and governmental affairs with the National Propane Gas Association, agreed with the push for a long-term extension but acknowledged the challenges ahead. He noted that Congress' short-sighted fiscal decisions over the last several years, which have resulted in the expiration and retroactive reauthorization of many incentives, tend to suggest that a five-year extension might be too expensive for lawmakers to swallow right now.

“But in the grand scheme of things, they're not that expensive,” Squair said.
When panelists were asked whether incentives for vehicles, fuel or infrastructure were at the top of their respective wish lists – and only one set of incentives could be chosen – the answers varied.

Both Anne Steckel, vice president of federal affairs for the National Biodiesel Board, and Tom Buis, CEO of ethanol firm Growth Energy, expressed their hope that Congress would leave the Renewable Fuel Standard untouched.

Godlewski said the natural gas vehicle industry would likely be best served by incentives that support the deployment of NGVs across all use and weight classes, boosting the LNG and compressed natural gas refueling infrastructure sector in kind.

For his part, Squair was most desirous of an extension of the alt-fuel excise tax credit, remarking that passing that level of savings on to propane end users was a strong measure for supporting the autogas segment.

The question, of course, is whether any of these wish-list items will move forward.
“It's going to be tough – there's no question,” Godlewski said.

Luckily, it appears that some positive momentum could help usher in favorable policies for fleets and other alt-fuel stakeholders.