Air Products, a provider of hydrogen fueling and related technology and infrastructure, has opened the largest-capacity hydrogen fueling station for transit buses in the country in Santa Ana, Calif., along with several project collaborators.

The new fueling station, located at OCTA’s bus depot, is equipped with Air Products’ SmartFuel hydrogen fueling technology, design and equipment. OCTA’s current hydrogen fuel cell electric bus fleet comprises 10 buses, but the station is built with future growth in mind.  It has a fueling capacity for up to 50 buses, which corresponds to fueling up to 1,500 kg of hydrogen in an eight-hour time period. The station can fuel transit buses with an average of 28 kg of hydrogen per bus in a time frame of six to 10 minutes per bus, while also providing back-to-back bus fueling for up to 30 buses and simultaneous fueling capability with multiple fueling lanes.

“This station sets a new milestone for bus fueling capacity and demonstrates other continuing innovations in hydrogen fueling. While we have designed and built hydrogen fueling stations around the world for transit agencies, this station brings our advanced fast-fill technology to transit buses by taking advantage of our unique cryogenic compressors and specifically designed cooling system, as well as our liquid hydrogen supply position,” says Eric Guter, general manager at Air Products.

CTE, a nonprofit that advocates for clean, sustainable, innovative transportation and energy technologies, is managing the project. CTE and OCTA secured $12.47 million, more than half of the funding for the project, from CARB through California Climate Investments, a statewide initiative that puts billions of cap-and-trade dollars to work reducing greenhouse gas emissions, strengthening the economy and improving public health and the environment.

Air Products designed and jointly installed the hydrogen fueling station, supplied most of the major equipment, will substantially maintain the station and will supply the hydrogen for fueling the buses. Air Products will deliver liquid hydrogen to the station, where it will be vaporized and compressed into a high-pressure gas using its proprietary cryogenic hydrogen compressors, before being dispensed with Air Products’ fueling dispensers into the buses. Trillium was project manager, provided site preparation, some equipment, installation and first-line maintenance.

Air Products has been fueling buses with hydrogen for over 20 years and recently installed a 1,000 kg/day hydrogen bus fueling station in Asia, as well as a 200 kg/day station in Europe.  Air Products has also been involved with bus projects with Transport for London and with SARTA in Canton, Ohio. 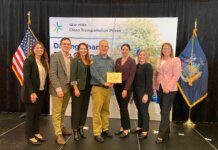