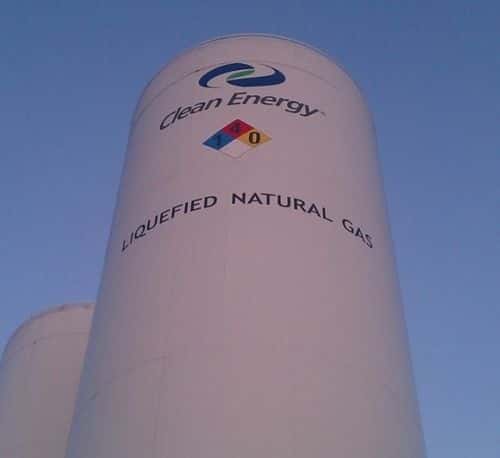 Clean Energy Fuels Corp. President and CEO Andrew Littlefair says ‘momentum towards natural gas in transportation is definitely picking up speed,’ which is reflected heavily in his own company's progress with deploying compressed natural gas (CNG) and liquefied natural gas (LNG) refueling facilities across the U.S.

As a part of Clean Energy's second ‘Road to Natural Gas’ update, which was released this week, the firm noted that it has completed the construction of 42 CNG stations – both private facilities and public-access sites – since the beginning of this year. These 42 stations join the 63 that Clean Energy finished in 2011.

Also notable is that the company has completed the development of 48 LNG stations to date. These facilities, which have been built specifically to accommodate long-haul trucks running on LNG, are a part of what Clean Energy calls ‘America's Natural Gas Highway’ – a network of up to 150 new LNG stations that will refuel Class 8 tractors.

Clean Energy's LNG station development was particularly brisk during the third quarter, when 25 facilities were completed from Georgia to Oregon, Ohio to Texas and many points between. Nearly all of these new LNG refueling points are located at existing Pilot and Flying J truck stops.

The cost advantage natural gas has over diesel is well understood and, to a large extent, accepted among fleet operators. But those monitoring the natural gas vehicle (NGV) arena have undoubtedly heard the ‘chicken and egg’ adage, referring to the sector's central dilemma: Investing in NGVs (whether it is OEMs investing in product development or fleets deploying whatever NGV is currently available) without having access to refueling infrastructure – or vice versa – is a challenging proposition.

In the LNG/Class 8 space, Clean Energy has laid the egg. Four dozen of them, to be precise, with dozens more to come.

And in a sense, Cummins Westport is putting a chicken in the coop: its ISX12 G natural gas engine, which will go into production in a few months and holds a lot of promise for powering tractor-trailer fleets. FedEx, for example, just took delivery of its first two Class 8 trucks with the new 11.9-liter engine and will be fueling at Clean Energy sites.

Momentum does appear to be picking up speed, as Littlefair said. And for fleets, the key takeaway from Clean Energy's latest ‘Road to Natural Gas’ is that refueling infrastructure is becoming more and more prevalent.

Photo by NGT News: A multi-thousand-gallon Clean Energy LNG tank at the Port of Long Beach in California.