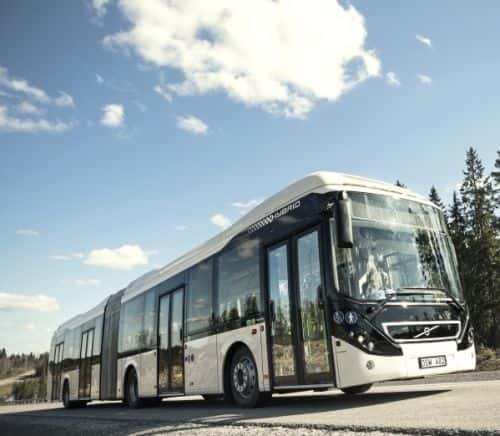 Volvo Bus Corp. says it is beginning field tests of its new plug-in hybrid diesel-electric heavy-duty buses this month in Sweden. The company claims that the new technology yields a 75% improvement in fuel economy and a reduction in carbon dioxide emissions of up to 80% compared to equivalent diesel-powered buses.

Volvo notes that if these buses use biodiesel in lieu of standard diesel, the hybrid vehicles' CO2 emissions can be cut by up to 90%.

The new plug-in hybrids, which feature an electric motor paired with lithium-ion batteries and a 5.0-liter diesel engine, are based on the existing Volvo 7900 Hybrid bus platform. The plug-ins are recharged via a collector that is installed on the bus' roof. A full charge is achieved in 10 minutes or less, Volvo says, and the bus' electric-only range is about four miles in regular service.

The field tests will study and verify the reductions in energy consumption and emissions, as well as allow Volvo and Vasttrafik to compile information from drivers, passengers and residents related to the new bus technology. Another demonstration project involving eight plug-in hybrids is planned for Stockholm next year.

‘Together with Volvo and several other partners, we have had the chance to develop a technology that significantly reduces both emissions and energy use,’ says Lars Backstrom, managing director of Vasttrafik, the public transit organization in Gothenburg, Sweden. ‘By 2025, 95 percent of our traffic is to be carried out using non-fossil fuels.’

Volvo has deployed more than 1,000 traditional hybrid buses worldwide. Commercial manufacturing of the new plug-in hybrid platform will likely begin within the next two years, the company says.