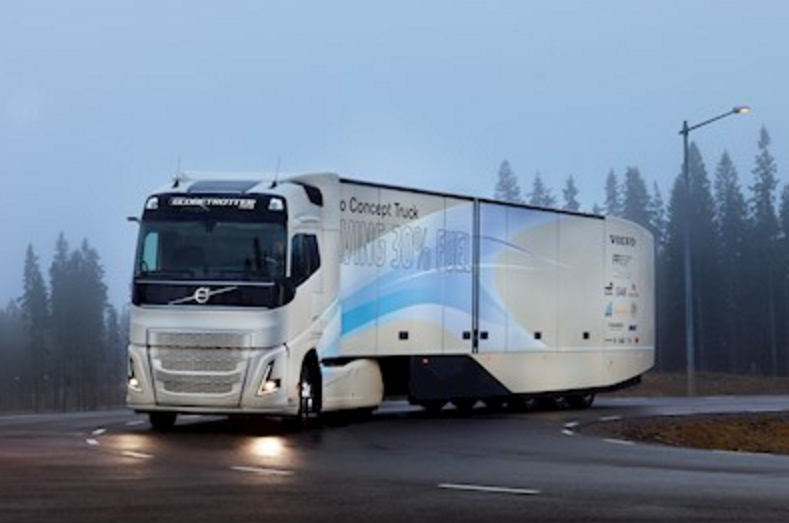 In a recent announcement, Volvo Trucks says it has developed its first hybrid vehicle designed for long-haul applications – the Volvo Concept Truck. In combination with the vehicle’s other improvements, the Concept Truck offers an approximate 30% reduction in fuel consumption and CO2.

Volvo Trucks first unveiled the Volvo Concept Truck in May 2016 and has now developed and enhanced the vehicle even further. In addition to the improvements in aerodynamics, rolling resistance and reduced weight, the new version also features a hybrid powertrain – one of the first of its kind for heavy-duty trucks in long-haul applications.

“We strive to be at the forefront of electromobility and to constantly push the limits when it comes to reducing fuel consumption and emissions,” says Claes Nilsson, CEO at Volvo Trucks. “Over the coming years, as society moves more and more towards renewable energy, we strongly believe that electromobility and hybrid technology will become increasingly important. The powertrain in our concept truck has been developed to improve transport efficiency and thereby help the industry towards sustainable transport.”

According to the automaker, an enhanced version of Volvo Trucks’ driver support system I-See has been developed specially for the hybrid powertrain, which analyzes upcoming topography to calculate the most economical and efficient choice between the diesel engine and the electric motor, as well as the optimal time to use the recovered energy.

In long-haul transportation, it is estimated that the hybrid powertrain will allow the combustion engine to be shut off for up to 30% of the driving time. This will save between 5% and 10% in fuel, depending on the vehicle type or specification and its drive cycle. It also offers the ability to drive in full electric mode for up to 10 kilometers, enabling the vehicle to operate with zero emissions and low noise.

“Today, long-haul transport accounts for a significant share of the total energy consumption in the transportation sector. Using hybrid technology, the potential reduction in fuel and emissions is considerable and an important step towards reaching both our and society’s environmental goals for the future,” says Lars Mårtensson, director of environment and innovation for Volvo Trucks.

The Volvo Concept Truck also builds on many of the gains achieved by its predecessor – namely, improved aerodynamics, rolling resistance and reduced vehicle weight.

“This is a platform for verifying several new technologies for increasing transport efficiency,” says Åke Othzén, chief project manager for Volvo Trucks. “Some of these developments have already been introduced to our trucks, and some will be introduced in the near future. The hybrid powertrain is partly based on knowledge and experience from Volvo Buses’ hybrid and electric buses.”