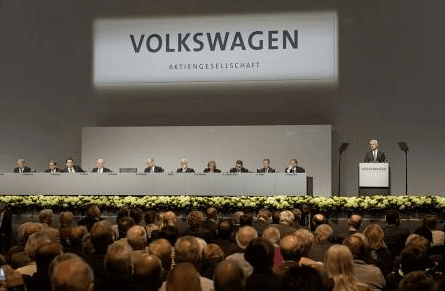 The Volkswagen Group has invested $3.3 billion in alternative drive technologies over the last five years and plans to triple this amount in the next five years, according to Matthias Muller, CEO of Volkswagen AG.

“The future is electric. We intend to be No. 1 in e-mobility by 2025,” Muller announced at the group’s annual general meeting in Hanover, Germany.

According to Muller, intensive efforts are under way to help achieve the breakthrough of this technology – yet Volkswagen will continue to develop diesel and petrol engines, making them even more efficient and eco-friendly.

“In order to provide affordable, sustainable mobility on a large scale, we will continue to deploy the complete spectrum of drive types: from conventional to fully electric,” he said, outlining the group’s drivetrain strategy.

He explained that the 12-brand group is sending clear signals for the expansion of e-mobility and announced that the group will invest nearly $10 billion in alternative drive technologies over the course of the next five years.

The newly established Center of Excellence in Salzgitter, Germany, will bundle group-wide competence in battery cells and modules, he noted.

“At the same time, we are conducting intensive negotiations to establish partnerships in the field of battery cells in Europe and China. You will soon be hearing more about this,” the CEO added.

Notwithstanding the diesel crisis, Muller said Volkswagen is well prepared to face fundamental change in the automotive industry.

“In the last fiscal year, we laid the foundations for the most extensive transformation in the history of Volkswagen. And we put up an operative performance that was much better than many people had thought possible,” he said. “For 2017, it’s now ‘full speed ahead!'”