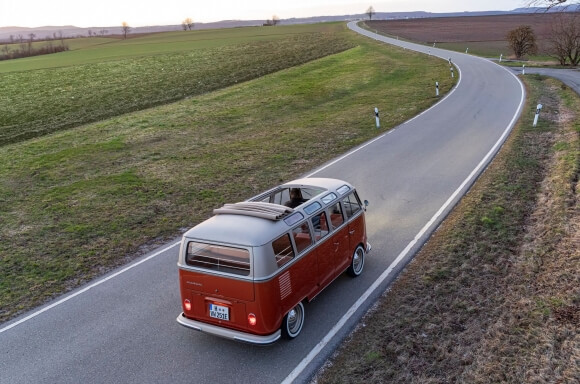 Volkswagen Commercial Vehicles (VWCV) has unveiled the e-BULLI concept, an all-electric vehicle that produces zero emissions on the road.

Equipped with the drive system components of the latest Volkswagen electric vehicles (EVs), the concept vehicle is based on a T1 Samba Bus produced in 1966 and comprehensively restored. VWCV partner eClassics is planning to offer T1 conversions in the style of the new e-BULLI.

VWCV engineers and designers formed a team along with drive system technicians from Volkswagen Group Components and the eClassics company, which specializes in electric car conversions. As the basis for the future e-BULLI, the team chose a T1 Samba Bus that, prior to its conversion, spent half a century on the roads of California.

The 43-hp four-cylinder boxer engine gave way in the e-BULLI to a silent Volkswagen electric motor delivering 82 hp. Power transmission is by means of a single-speed gearbox. The drive system is coupled with the gear lever, which is now positioned between the driver’s and front passenger’s seat. The e-BULLI reaches a top speed of 80 mph (electronically limited). With the original drive system, the T1 managed a top speed of 65 mph.

All of the electric drive system’s standard parts are being made by Volkswagen Group Components in Kassel. The lithium-ion modules are designed at the Braunschweig site and are then transferred by eClassics into a battery system appropriate for the T1.

Volkswagen is offering the T1 conversion, complete with redesigned front and rear axles, at prices starting from €64,900.