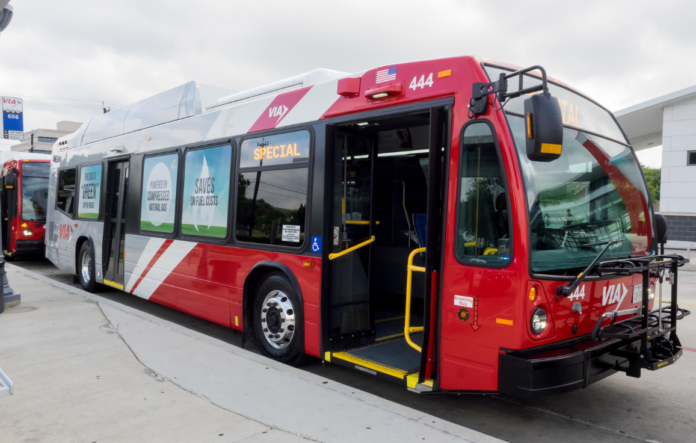 VIA Metropolitan Transit in Texas has introduced the first of more than 400 new compressed natural gas buses to be deployed for its fleet conversion.

According to the transit agency, the switch over to the cleaner buses is part of VIA’s multi-year plan to significantly reduce vehicle emissions, decrease operating costs and allow VIA to carry out planned service enhancements.

Once complete, the transformed fleet will bring a 97% reduction of nitrogen oxide emissions and affirm VIA’s focus on environmentally sustainable mobility in the region.

The agency officially introduced its first CNG buses at an event on Thursday.

“Today, we celebrate the move toward a new, environmentally sustainable era in public transportation for our region,” said VIA President and CEO Jeffrey C. Arndt. “VIA’s conversion to an all-CNG fleet is where the rubber meets the road for VIA’s commitment to drive innovation and connect our region with a cleaner, ‘greener’ future.”

In addition, the agency says a new 10-pump CNG fueling station will be built and operational later this year for refueling purposes.

The new buses, manufactured by Nova Bus, are 40 feet by 102 inches, with a 67-passenger capacity. They will replace aging buses in the current fleet, which are between 12 and 15 years old. VIA says it will replace more than half of its existing fleet by late this summer, with the ongoing fleet conversion expected to be complete by 2020.

Once the new fleet is completed, the annual fuel cost savings is estimated at $8.5 million.

VIA serves 14 member cities and the unincorporated areas of Bexar County, operating seven days a week on 90 routes.

Photos courtesy of VIA Metropolitan Transit.