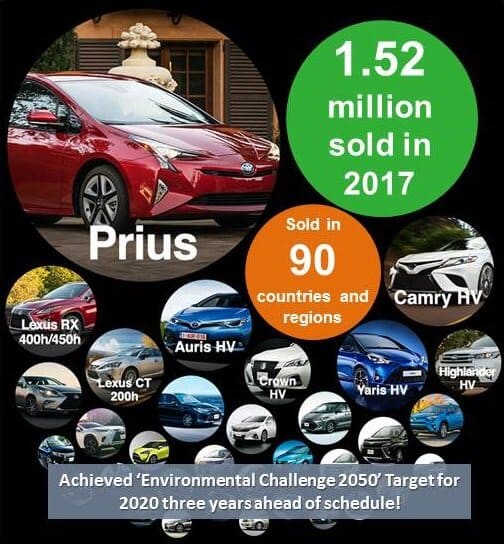 Toyota Motor Corp. has announced that it reached a major milestone in annual sales of  electrified vehicles, including a wide range of hybrids, in 2017 with over 1.52 million sold worldwide.

The figure was an increase of 8% over the prior record set in 2016, marking back-to-back years of growth. It also accomplishes one of Toyota’s Environmental Challenge 2050 targets – selling more than 1.5 million electrified vehicles in a single year – three years ahead of the original target set for 2020. Additionally, the automaker says cumulative sales of electrified vehicles now exceed 11.47 million, which represents a reduction of more than 90 million tons of CO2 compared to sales of equivalent conventional vehicles.

“In just over 20 years, we have seen electrified new vehicle sales increase from under 500 sales to more than 1.5 million sales,” says Shigeki Terashi, executive vice president of Toyota Motor Corp. “This is a testament from our customers to the quality, durability and reliability of our electrified powertrains, and, thanks to them, has led us to establish a solid and sustainable foundation for mass producing a more diverse portfolio of electrified vehicles across our range moving forward.”

Since the introduction of its first commercially available electrified powertrain on the Prius in Japan in 1997, Toyota has worked at improving the technology as the basis for its electrification efforts, having launched a mass-produced fuel cell electric vehicle, the Mirai, in 2014; the fourth generation of the Prius in 2016; and the second-generation Prius plug-in electric vehicle in 2017. The company says it will continue the development and diversification of electrified vehicles as it now turns its sights to include the mass production of battery electric vehicles from 2020, starting in China and India, followed by Japan, the U.S. and Europe. Toyota says it also aims to further expand sales of hybrid electric vehicles in emerging markets to further contribute to lowering CO2 from new vehicles sales worldwide.

The efforts to improve and increase the diversity of electrified powertrain options is tied directly to Toyota’s Environmental Challenge 2050, wherein the company aims to achieve annual electrified vehicle sales of 5.5 million units by 2030, as announced in December 2017. To achieve its goal, Toyota unveiled plans to have 10 battery-electric vehicle models available worldwide by the early 2020s, and from around 2025, the company aims to have an electrified version available for all vehicle models across its global lineup.