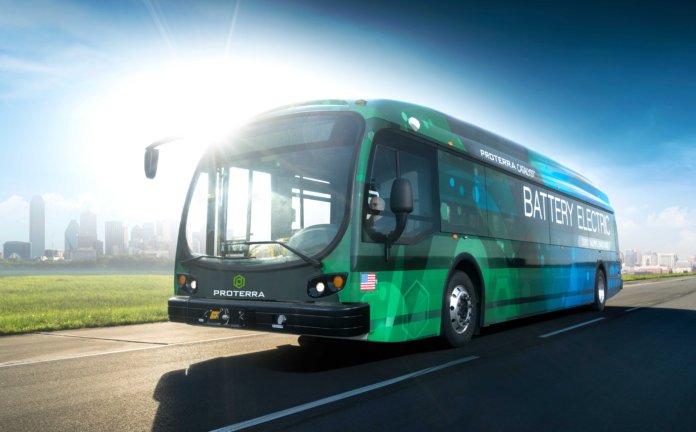 At this week’s American Public Transit Association (APTA) Expo in Atlanta, California-based manufacturer Proterra has introduced the DuoPower drivetrain for its Catalyst battery-electric buses, as well as announced a new partnership with Belgian bus and coach maker Van Hool NV.

With the DuoPower drivetrain, the Catalyst zero-emission bus will now have nearly twice the horsepower and acceleration and will be five times more efficient than a standard diesel bus, according to Proterra. In addition, the performance of the DuoPower drivetrain represents a 20% increase in efficiency over Proterra’s standard ProDrive system.

For the Catalyst E2 max, the DuoPower drivetrain enables a nominal range of 426 miles on a single charge, which the company claims far exceeds the average distance of North American transit routes. Proterra says it recently tested the DuoPower drivetrain at the Navistar Proving Grounds in Indiana, achieving a world-record range for an electric vehicle, where the 40-foot Catalyst E2 max traveled 1,101.2 miles on a single charge.

Designed for durability, Proterra’s DuoPower drivetrain features two electric motors that deliver 510 horsepower, accelerating a Catalyst bus from 0-20 mph in 4.5 seconds, while also achieving 26.1 MPGe. In addition, the company claims the new drivetrain can propel a bus up a 26% grade, which is more than twice the performance of the average 35- or 40-foot diesel bus, making it an ideal option for transit agencies with steep hills.

“When Proterra originally introduced EV technology to the transit industry, we proved that EVs could compete with fossil fuel vehicles and replace diesel buses in most cities,” says Ryan Popple, CEO of Proterra, in a press release. “But we didn’t stop there. We continued to innovate, and today we’re announcing a drivetrain that completely outperforms an internal combustion diesel or [compressed natural gas] engine in every major performance category – efficiency, reliability, acceleration, hill climb and passenger-carrying power. In transit, state-of-the-art vehicle performance is now defined by EV technology like our new DuoPower driveline. For fleet customers that want the very best speed, power, energy efficiency and reliability – EV is the answer.”

In addition to launching the new drivetrain, Proterra has announced a deal to provide its battery platform for Van Hool NV’s first all-electric motor coach in the North American market.

Van Hool’s CX Series electric vehicle will utilize Proterra’s E2 battery technology, and operators will be able to test drive the all-electric CX45E coach at the Van Hool factory in late 2018, with deliveries beginning in 2019. The shorter CX35E coach model will be introduced shortly thereafter.

The release says Van Hool, in partnership with its exclusive U.S. distributor ABC Bus Companies Inc., has become a popular motor coach provider in the U.S., with more than 10,000 coaches and buses on the road today serving a number of large Silicon Valley corporate-sponsored commuter shuttles and other customers.

Filip Van Hool, CEO of Van Hool, says, “The diesel CX45 coach has a proven track record and has become a benchmark coach in its own right in the industry. Integrating Proterra’s proven battery technology in the CX will take this coach to the next level. It is a clear statement as to Van Hool’s long-term commitment to the North American coach market and a testament to Van Hool’s responsiveness to the overall demand for zero-emission vehicles at large and over-the-road coaches in particular.”

The new CX45E and CX35E models will be co-branded with Proterra and will utilize Van Hool’s CX platform. ABC Bus Companies has helped Van Hool for the last three decades to establish distribution, sales, parts and service networks and will continue to forge new market adoption with the CX Series.

“Entering the motor coach market and electrifying more fleets alongside Van Hool, a proven market leader, is a key milestone for Proterra and for the heavy-duty electric transportation industry,” says Popple. “Having proven our EV technology in transit, we’re pleased to expand our reach and help other heavy-duty commercial vehicle applications go electric.”