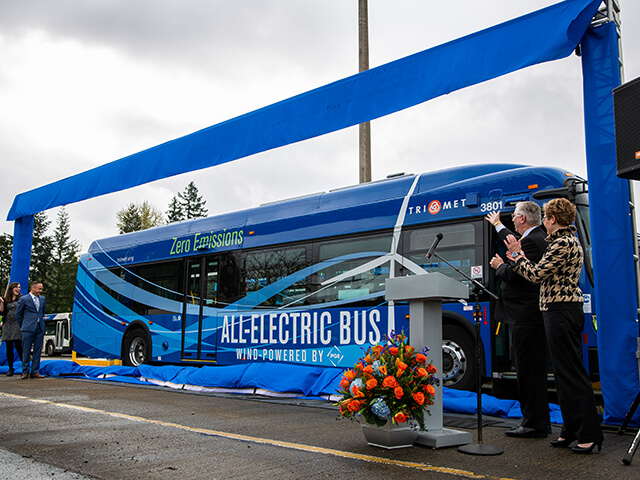 New Flyer of America Inc. reported an order from TriMet for five 40-foot battery-electric Xcelsior CHARGE transit buses in September 2017. TriMet partnered with PGE to purchase, own and maintain six ABB chargers and related infrastructure for the buses. The program was funded in part with a $3.4 million grant from the Federal Transit Administration’s 2016 Low and No Emission (Low-No) Vehicle Deployment Program.

TriMet is operating the Xcelsior CHARGE bus on Line 62-Murray Blvd. in the Portland, Ore., metro area. The route covers 13 miles and an elevation change of 700 feet.

“Transit inherently plays an important role in reducing emissions and easing congestion,” says Doug Kelsey, general manager of TriMet. “Now, as our first all-electric bus rolls into service powered by the wind, we are furthering our commitment to the environment and are at the forefront of a cleaner future, both for TriMet and the Portland, Ore., region.”

Congratulations on the wind powered electricity and the emission free electric bus. Unfortunately, to calculate the actual “environmental cost” of this system you have to calculate the environmental impact of producing and disposing of the batteries necessary to make the bus run. Range and charging time may become significant issues as you use your new buses. In addition to the batteries, you have to figure in the environmental cost of mining the rare metals (cobalt and lithium) that make the battery work. Cobalt is mined in Africa using 13 year old labor. There is probably not an unlimited supply of… Read more »