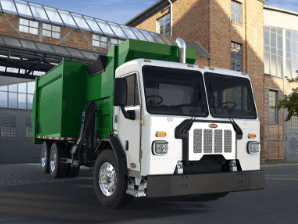 Peterbilt Motors Co. is displaying a Model 520 refuse truck demo with an advanced battery-electric drive system at the WasteExpo 2017 show in New Orleans from May 8-11.

“Peterbilt is working closely with its partners to explore the capabilities and performance of battery-electric drive systems,” says Scott Newhouse, Peterbilt chief engineer. “Customers in urban environments and applications such as drayage and refuse collection stand to benefit from the zero-emissions performance of these advanced vehicles.”

The Peterbilt Model 520 on display is equipped with the Transpower ElecTruck drive system, which has accumulated over 80,000 miles of Class 8 heavy-duty use in a variety of commercial applications since 2013.

As reported, the ElecTruck system uses high-power electric motors, inverters and batteries to power commercial trucks weighing as much as 80,000 lbs.

“Powering heavy refuse trucks is a logical next step in the adaptation of our electric drive technology to vehicles requiring conversion to zero-emission operation,” says Joshua Goldman, TransPower’s vice president of business development.

Peterbilt says the variant of the TransPower ElecTruck system developed for the Model 520 refuse truck uses a 300 kWh battery pack to enable an urban refuse truck to operate for up to 65 miles or eight hours on a single charge. The ElecTruck system also features a 70 kW onboard battery charger that can fully charge the truck’s lithium-ion battery pack in two to four hours.