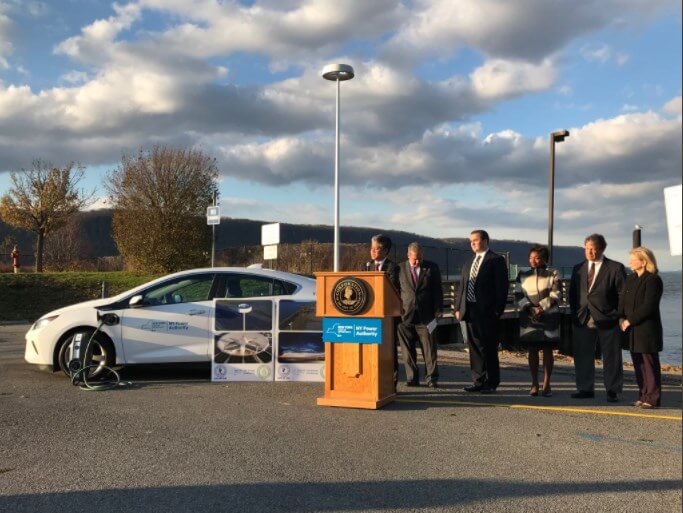 The New York Power Authority (NYPA) recently announced $400,000 of completed clean energy projects in the City of Yonkers, including new solar- and wind-powered lighting at the city’s John F. Kennedy Marina on the Hudson River, purchase of hybrid electric city vehicles, and the addition of nine electric vehicle (EV) charging stations. The lighting project makes the Marina park one of the first parks in the U.S. to be completely independent from the power grid through its use of renewable energy, according to NYPA.

NYPA President and CEO Gil C. Quiniones joined Yonkers Mayor Mike Spano and other state and local elected officials at the JFK Marina on Thursday to showcase the new lights and EV infrastructure.

“We at NYPA look forward to continuing our successful partnership with the City of Yonkers on clean energy projects like this magnificent lighting upgrade,” said Quiniones. “Now, more than ever, the reality of climate change must guide our energy policies and decisions. Clean energy solutions like the ones we celebrate here in Yonkers today, underscore Governor Cuomo’s and NYPA’s commitment to energy-efficiency projects of every type and scale, to help us accomplish our clean energy goals.”

“Just a few years ago, Yonkers became the first city in New York to cut its energy usage drastically by replacing all 12,000 city streetlights with LEDs,” said Spano. “Working with Governor Cuomo and the New York Power Authority, today Yonkers is once again leading by example in energy efficiency by illuminating a waterfront that’s completely off the grid using wind and solar power. These projects build on our progress in reducing our greenhouse gas emissions and ensuring a sustainable future for Yonkers.”

The project is part of NYPA’s Five Cities Energy Plans initiative, which is aimed at increasing energy efficiency and clean energy resources in Albany, Buffalo, Syracuse, Rochester and Yonkers, the largest cities in the state outside New York City.

“Congratulation to Mayor Spano and the City of Yonkers on their smart decisions to combat climate change and save taxpayers money with these innovative energy-efficiency projects,” said NYPA Trustee Tracy McKibben. “I’m proud to be working with Governor Cuomo and the New York Power Authority helping towns, cities and institutions across New York State to design, implement and finance energy-saving projects for a cleaner, healthier city, state and planet.”

According to NYPA, the 17 new wind- and and solar-powered lights that surround the marina operate with LED (light-emitting diode) high-efficiency lightbulbs. They will ensure the marina is energized even during large-scale power outages and protect the lights from storm damage and flooding. The lights offered an ideal solution for Yonkers, as the city had to replace previous lights frequently due to damage caused by storms and flooding. The new lights generate energy on top of the fixture rather than at the base so they are not affected by ground flooding and are more resilient. In addition, because the lights are powered by renewable energy, they are not susceptible to power outages from the electric grid.

Launched by the governor in 2014, the Five Cities initiative expands upon BuildSmart NY, a program established by Cuomo in 2011 to increase energy efficiency in public buildings. Both programs are administered by NYPA. The Five Cities Program works toward the goal of cutting energy use 20% by 2020 for municipal buildings and 20% by 2030 citywide, including private buildings. The effort is a key pillar of the governor’s Reforming the Energy Vision (REV) strategy to build a cleaner, more resilient and affordable energy system and New York’s Clean Energy Standard, which mandates that half of all electricity used in the state by 2030 comes from renewable sources.

Including the projects announced Thursday, the Five Cities program has provided $7.6 million to date in funding for various energy efficiency projects that have saved the five cities together more than $2 million in annual energy costs and reduced carbon emissions by 9,880 metric tons, or the equivalent of taking nearly 2,100 cars off the road, according to NYPA.

State Sen. Andrea Stewart-Cousins said, “We have a real opportunity to serve as an example to the rest of the nation by taking the lead in investing in a green economy. Solar- and wind-powered lighting are cutting-edge technologies in a booming new industry, and through programs like this, we can take real, meaningful action toward cutting carbon emissions and creating thousands of new, innovative green jobs.”

“Renewable energy should be a hallmark of every public project we do, not just in Yonkers, but everywhere,” said State Sen. George Latimer. “Projects like this are great in so many ways; great for the environment, great public policy, and a great way to make government a good neighbor. By utilizing renewable energy sources to provide lighting for the JFK Marina, as well as electric vehicles and the manner to charge them, this is a giant leap forward for our community.”