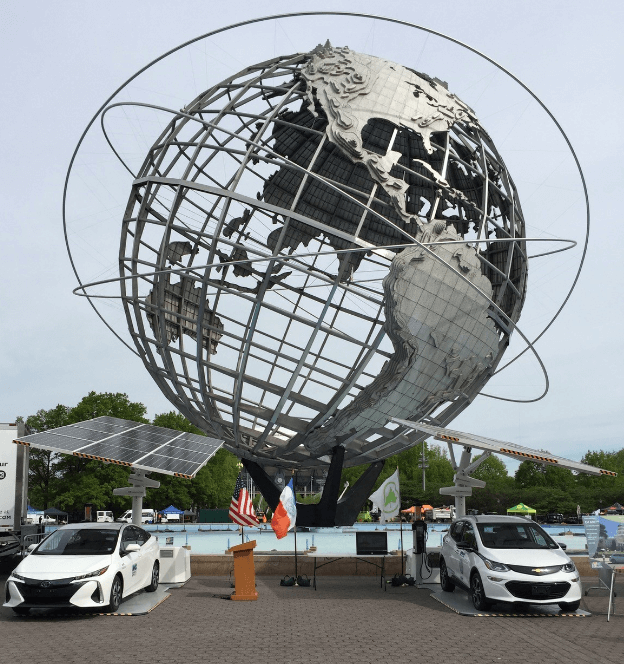 New York City has issued a three-year contract to purchase Envision Solar’s EV ARC products for a posted initial value of $3.8 million and an optional one-year renewal at the end of the three-year term.

The city has announced that its first order will be for at least 30 EV ARC units in 2017.

The first units purchased through this contract were delivered on May 10 and were featured at the city’s 29th Annual Fleet Show at the Unisphere in Flushing Meadows. The units charged EVs and supplied the event’s power needs before being relocated to their permanent locations at the World’s Fair Marina and Thomas Edison High School in Queens.

New York has also ordered the company’s ARC Mobility transportation system, which allows a single operator to pick up and move an EV ARC anywhere within a 1,500-mile radius.

As reported, the EV ARC units will be deployed across the five boroughs and will deliver solar-powered EV charging to the city’s fleet of electric vehicles.

The EV ARC product is also immune to grid interruptions, such as those experienced during hurricanes or terrorist actions. New York’s use of the solar-powered chargers will ensure that fleet vehicles remain in service during grid failures. The EV ARC model selected by the city is capable of folding down during a hurricane. It continues to generate, store and deliver electricity in its low-profile hurricane configuration.

Each EV ARC is also equipped with an emergency power (E-Power) panel, which allows first responders and other vital personnel to use the EV ARC as an emergency generator during disasters or other grid outages.

New York City will avoid utility costs through the use of EV ARC chargers. The fact that they double as emergency generators that need not be stored, fueled or maintained will generate further economic benefits.

“New York City is one of the world’s most recognizable brands,” says Desmond Wheatley, CEO of Envision Solar. “Amongst all the available choices, they have selected our American-made, secure, solar-powered EV charging station, showing that the world’s greatest city can drive on sunshine and save lives with our solar-powered energy storage units.”