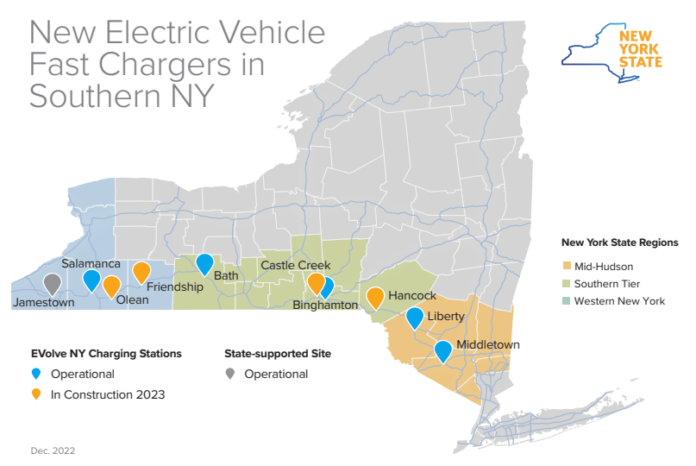 A dozen new electric vehicle fast chargers are now deployed along the primary travel corridor from the Southern Tier to Western New York, announced Gov. Kathy Hochul. The new chargers will ensure that one of New York State’s “fast charging deserts” is more accessible to EVs and that all regions across the state offer more convenient charging opportunities.

The installation of new high-speed charging sites, led by the New York Power Authority, currently includes Jamestown, Salamanca and Bath, and will soon be supplemented by Olean, Friendship, Castle Creek and Hancock, helping support more convenient and accessible EV travel along Interstate 86 and Route 17 between the Hudson Valley and Lake Erie.

“New York State is charging forward toward a greener and cleaner future by making electric vehicles more accessible to everyone,” Hochul says. “These new charging stations are sited along the most traveled corridor in the southern region, which will be pivotal towards encouraging drivers in the Southern Tier and Western New York to make the transition to greener vehicles.”

Through its EVolve NY program, the New York Power Authority (NYPA) maintains the largest open-access high-speed charging network in New York State with more than 100 ports at 30 sites along major travel corridors, helping ensure that EV drivers in New York do not have to worry about running out of charge. The program aims to eliminate “fast charging deserts” and encourage the development of public charging infrastructure that is available to all New Yorkers and visitors.

“Electric vehicles are more efficient and less expensive to drive, and they’re key in reducing air pollutants from the transportation sector,” says New York Power Authority Interim President and CEO Justin E. Driscoll. “NYPA’s role in the clean transportation transition is to build infrastructure in urban hubs and along well traveled corridors, making it more convenient to travel long distances through every region in New York. Our EVolve NY program has made great strides in installing more charging hubs and will continue its industry-leading work into 2023.”

Two new EVolve NY sites now operate in a public lot in the City of Salamanca (768 Broad St.) in Cattaraugus County and in a municipal parking lot in the Town of Bath (15 E. William St.) in Steuben County. Chargers were earlier installed at a Mirabito convenience store in Binghamton in Broome County, at a shopping center in Liberty in Sullivan County, and in a municipal lot in Middletown in Orange County, and plans for a dozen more ports are under development in Olean in Cattaraugus County, Friendship in Allegany County and Castle Creek in Broome County. The Town of Hancock in Delaware County will host the largest open access fast charging hub in the Southern Tier region with eight charging ports when it’s complete later this month. The additional sites, expected to be constructed in the spring, run through primarily rural areas located in close proximity to I-86 and Route 17.

The new DC fast chargers can charge most of the battery capacity in any make or model of EV in as little as 20 minutes. The charging stations, on the Shell Recharge or Electrify America networks, are equipped with fast charging connectors – a combined charging system rated at up to 150 kW and a CHAdeMO connector rated at up to 100 kW – so all electric vehicles, including Tesla cars with an adapter, can plug in.