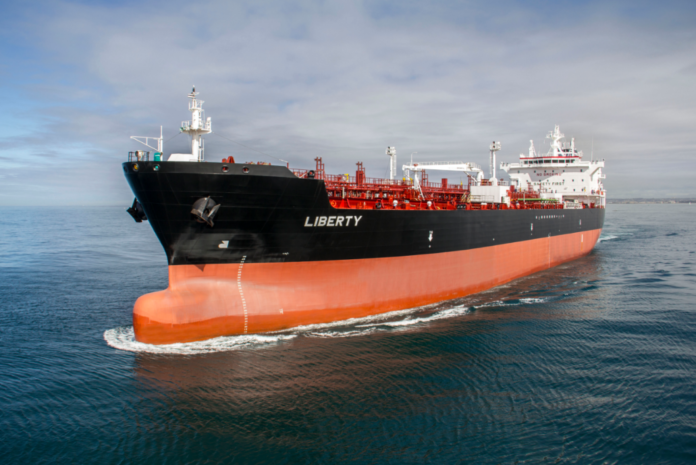 In 2013, NASSCO entered into an agreement with SEA-Vista to design and build three 50,000 deadweight-ton, LNG-ready product carriers, to include a 330,000 barrel cargo capacity each.

As reported, the 610-foot-long tankers are a new “ECO” design, offering improved fuel efficiency and cleaner shipping options. Construction for the first of the three ships for SEA-Vista began in November 2014.

The first two ships – the Independence and the Constitution – have been delivered and are servicing the Jones Act trade.

The Liberty is the seventh vessel in an eight-ship ECO Class tanker program for two separate customers, SEA-Vista and American Petroleum Tankers. The eighth ship of the program, the Palmetto State, is scheduled to be christened and launched on March 25 at the NASSCO shipyard in San Diego.

NASSCO is the only major shipyard on the West Coast of the U.S. conducting design, construction and repair of commercial and U.S. Navy ships. In the past decade, NASSCO delivered 29 ocean-going ships to government and commercial customers – including the world’s first LNG-powered containerships.