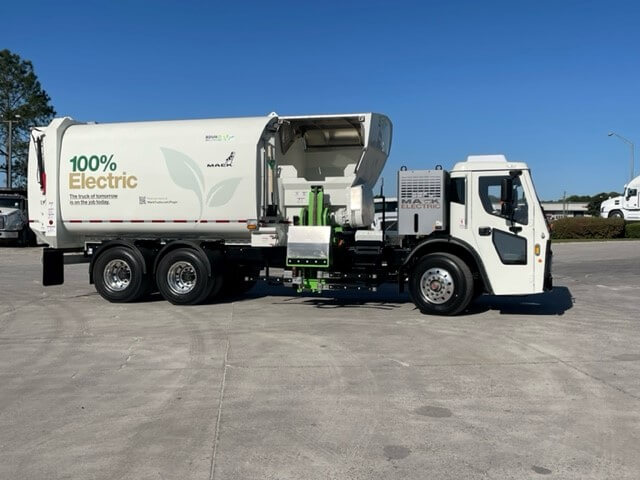 Mack Trucks has signed multiple agreements for its Mack LR Electric in Florida and California. The City of Ocala in Florida purchased two Mack LR Electric refuse vehicles to add to its solid waste management fleet. Miami-Dade County, also in Florida, purchased the truck as its first heavy-duty electric vehicle. The City of Santa Cruz in California has added the refuse vehicle as its first fully electric vehicle in the municipality’s sanitation fleet and has plans to order another one.

“It’s no surprise that a progressive operation like the City of Ocala, a longtime Mack customer, is ready to deploy two Mack LR Electric trucks to help them achieve their environmental goals, as well as to reduce the noise during refuse collection,” states Jonathan Randall, Mack Trucks’ senior vice president of sales and commercial operations. “The LR Electric features battery-electric technology that offers zero emissions and a quiet ride, as well as all of the amenities of our popular diesel-powered LR model.”

The City of Ocala operates 40 refuse vehicles in its fleet, collecting both residential and commercial refuse. About 70% of the city’s waste collection is on commercial routes, utilizing front-loaders, and 30% is residential, using automated side-loaders. The Mack LR Electric models will do both. The city received a 2020 grant from the Environmental Protection Agency to help with the purchase. Ocala also received an additional $1 million grant to buy four more EVs.

“We chose the Mack LR Electric for numerous reasons,” says John King, fleet and facilities director for the City of Ocala. “Mack has an excellent reputation for building refuse vehicles, so they fully understand the complexities associated with the collection of garbage and waste disposal. We have a longtime relationship with Mack and have many diesel-powered Mack trucks in our fleet, so our technicians are familiar with the vehicles. Further, Mack has been producing trucks for more than 100 years, so it’s natural that they would successfully progress to electric vehicles.”

Miami-Dade County’s refuse vehicle is fitted with a Labrie body. Nextran will service and support the vehicles for both Florida customers. The LR Electric model will be used in residential route collection for Miami-Dade County servicing homes in a 320 square-mile area.

“The Mack LR Electric vehicle will be powered by the garbage it collects,” states Danny Diaz, director of fleet management for the Miami-Dade County Department of Solid Waste. “We are closely monitoring electric vehicles, and we plan to purchase more – especially when you factor in the savings on fuel and maintenance.”

“The city is committed to sustainability and green energy,” comments Guadalupe Sanchez, superintendent of resource recovery for disposal and processing for the City of Santa Cruz. “The Mack LR Electric will help us reduce emissions, improving air quality, while also helping us move toward our environmental goals.”