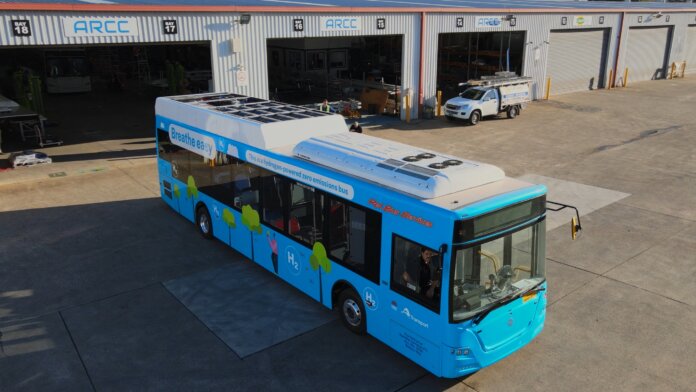 Loop Energy’s T600 (60 kW) fuel cell module will be integrated into ARCC’s 12.5-meter Viking Hydrolight city bus model, which aims to be in service by 2023. Designed for city bus operations in Australia, it will be built around ARCC’s lightweight chassis, which uses an aluminum frame and is primarily bolted, with less than 5% weld parts. Combined with the fuel efficiency of Loop Energy’s eFlow technology, the lighter bus weight will reduce fuel consumption while allowing for greater passenger capacity compared to other electric buses on the market.

ARCC currently has a hydrogen-electric bus participating in a New South Wales State Government-led trial to help inform how hydrogen technologies may factor in a broader rollout of zero-emissions buses. In 2019, Australia launched its National Hydrogen Strategy, underpinning its intent to become a major global player in hydrogen by 2030. The New South Wales and Queensland governments have committed to scaling the production of Green Hydrogen and launching over 10,000 hydrogen-EVs collectively.

“The electric bus market is quickly emerging as an important market segment for fuel cells. We are very proud that we have continued to grow our footprint in this sector in Europe, China, Asia and now in Australia,” says George Rubin, Loop Energy’s chief commercial officer. “We view the partnership with ARCC as a positive step to continuing our inroads into the electric bus market and supporting the development of next-generation bus platforms globally.”

“ARCC is proud to manufacture the only zero-emissions bus designed with a full-length aluminum chassis in Australia,” states Peter Murley, ARCC’s managing director. “We are excited to have Loop Energy’s eFlow™ technology play an important role in powering the Viking Hydrolight bus.”