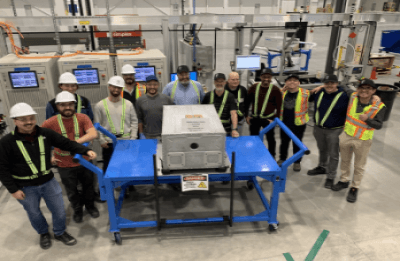 The Lion Electric Co., a manufacturer of all-electric medium- and heavy-duty urban vehicles, has completed production of its first lithium-ion battery pack at the company’s battery manufacturing facility located in Mirabel, Quebec.

“The production of our first battery pack out of our Mirabel battery facility is an important step for Lion and should, over time, bring with it a new level of optimization for product design and production efficiency,” says Yannick Poulin, Lion’s COO. “I am incredibly proud of our team for the continued advancement of this project, and I am very thankful to the Canadian and Quebec governments for their support in making it a reality.”

Lion’s new Mirabel battery manufacturing facility, once fully operational, is expected to give the company more control of supply, technology advancement and vehicle integration. Given the battery is typically the most expensive component of an electric vehicle, this new manufacturing capability should have a direct impact on Lion’s development of medium- and heavy-duty electric vehicle platforms, while also offering important economic benefits.