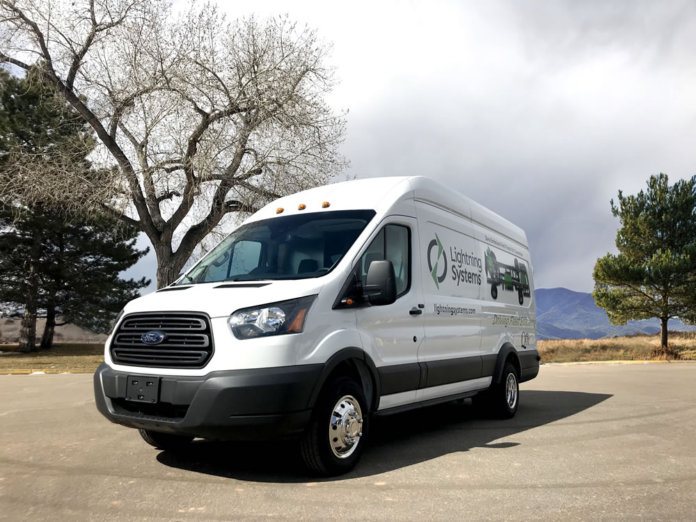 Lightning Systems, a developer of zero-emissions solutions for commercial fleets, is taking its new Ford Transit LightningElectric model on the road, showcasing the recently released vehicle efficiency ratings of 61 MPGe on in-town routes and 66 MPGe on highway.

Tours will start at Lightning Systems’ headquarters in Loveland, Colo. One will go westbound to California and throughout the state (Sacramento, San Francisco, Fresno, San Diego, Los Angeles and Long Beach), while the other will travel eastbound through Detroit to New York (Kansas City, Detroit, Albany and New York City). The westbound tour will end at the Advanced Clean Transportation (ACT) Expo in Long Beach, Calif., while the eastbound tour will culminate at the 30th annual Equipment & Vehicle Show in Queens, N.Y.

At the end of the eastbound and westbound tours, Lightning Systems will make deliveries of the LightningElectric to Halo Event Group, a FedEx Ground contractor in New York City, and to XPO Bus Sales in Los Angeles.

Test drives will be offered at the following tour stops:

“The upcoming road show is a great chance for fleets to experience firsthand how quiet, smooth and powerful the new LightningElectric is,” says Tim Reeser, CEO of Lightning Systems. “It comes with all the benefits fleets expect from a Ford vehicle – interior comfort, warranty, and top-class fit and finish – with the added benefits of a zero-emissions electric vehicle, like instant acceleration and lower maintenance costs.”

The LightningElectric is a battery-electric drivetrain package for the heavy-duty Ford Transit, a product used extensively by commercial and government fleets. Lightning says it was one of the first to test under the newly released 2018 CARB efficiency and range validation test procedures for medium-duty vehicles, performed at the SGS Environmental Testing Center. Results demonstrated that the Ford Transit 350HD equipped with the zero-emissions LightningElectric drivetrain achieved 61 MPGe on EPA City routes and 66 MPGe on EPA Highway routes, compared to 13 MPG and 15 MPG, respectively, for the identically configured gasoline Ford Transit 350HD.

LightningElectric is available for the Ford Transit as part of Ford’s eQVM program. The product, which went on sale earlier this year, is available for heavy-duty Ford Transits with a 10,360-pound gross vehicle weight rating (GVWR). Ford’s vehicle warranty covers the base chassis for vehicles with the Lightning drivetrain. Ford QVM dealers and upfitters perform installations and service.