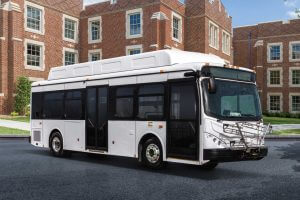 The Los Angeles Department of Transportation has ordered 130 battery-electric K7M buses from BYD. The buses will be built at BYD’s Coach & Bus factory in Lancaster, Calif.

“We applaud LADOT for its bold leadership, ambition and desire to improve the air quality for the City of Los Angeles,” says BYD North America President Stella Li. “BYD buses will be an important component of the city’s efforts to meet its sustainability goals. We are proud to partner with an agency that shares our green dream.”

The 30-foot K7M has 22 seats, a range of up to 150 miles, and can be charged in 2.5 to 3 hours. It has no air emissions and runs quietly. BYD also offers a 12-year warranty on its batteries – the longest in the industry.

LADOT has been working with BYD since 2014, when it conducted a 90-day trial of a battery-electric bus. In January 2017, city officials introduced the first of four K9S battery-electric buses acquired by the LADOT with a grant from the California Energy Commission.