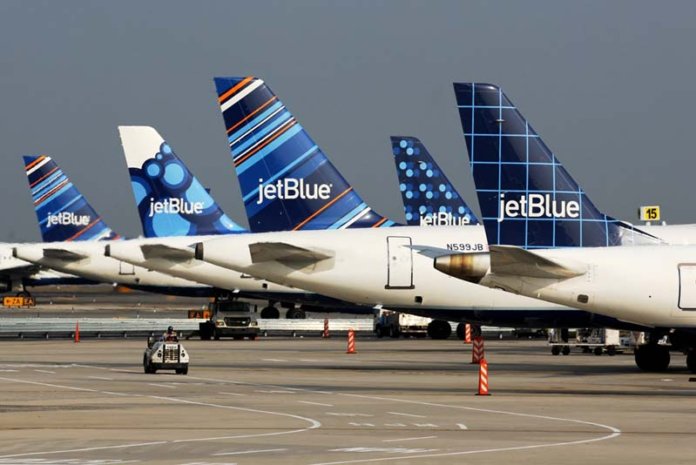 The Federal Aviation Administration (FAA) Voluntary Airport Low Emissions (VALE) grant will be used for the installation of 38 electric vehicle (EV) charging stations at Terminal 5 at JFK. These stations will enable the electrification of 116 baggage tug and belt loader vehicles at Terminal 5, which is operated by JetBlue.

“This funding will help reduce emissions and support energy efficiency at JFK, bolstering our efforts to transform JFK into a true 21st-century gateway for this great state,” says Cuomo. “Across New York, we are making strategic investments to support green technology, fight climate change, and create a cleaner, greener and healthier future for all.”

The funding is the first VALE grant awarded to a Port Authority airport. The charging stations at Terminal 5 will house 120 chargers to support the conversion of the vehicles from gas and diesel to electric. The FAA grant accounts for 75% of the total $5.3 million cost of the project.

JetBlue is providing most of the balance of the cost, agreeing to purchase the 116 vehicles over the scheduled four-year implementation period. In addition to the FAA grant, the Port Authority is receiving significant technical and financial assistance from NYPA, which will be delivering the project and providing an additional $200,000 grant.

Following a successful trial of electric ground support equipment, JetBlue partnered with the Port Authority, NYPA, and the FAA to utilize the FAA’s VALE grant program to help reduce greenhouse-gas emissions at Terminal 5.

Port Authority Executive Director Rick Cotton says, “The Port Authority is committed to best practices in reducing its carbon footprint at our airports and other facilities. Electric vehicles are a critically important way to improve air quality and reduce greenhouse gases. We welcome JetBlue’s participation in the program at Kennedy Airport, and we look forward to working with other agency partners on Green initiatives throughout the region.”

Gil C. Quiniones, NYPA’s president and CEO, adds “NYPA is excited to move forward with this impactful initiative, which will provide efficient electrification to the JetBlue terminal and eliminate fossil fuels for these vehicles at JFK, while supporting Governor Cuomo’s ambitious goal to reduce greenhouse gas emissions by 40 percent from 1990’s levels and bring New York State closer to a clean energy economy. The Port Authority has been a long-time partner for NYPA, and we look forward to continuing our efforts together to increase energy efficiency and reduce carbon emissions at Port Authority facilities.”

Sophia Mendelsohn, head of Sustainability for JetBlue, comments, “JetBlue is reducing our fuel consumption on the ground and in the air through technology. Like many technological advancements that have social and environmental benefits and also require investment, there is a chicken-and-an-egg problem as to where to start. Partnership between an airport and an airline breaks through this cycle, bringing clean technology to T5.”