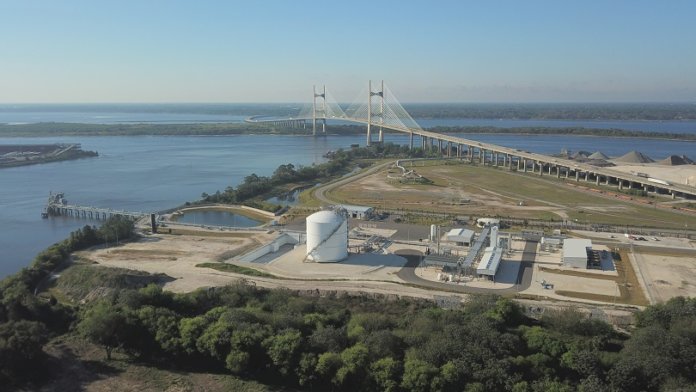 Officials with JAX LNG, a liquefied natural gas (LNG) facility located at Dames Point in Jacksonville, Fla., held a ribbon-cutting ceremony on May 16 to signify the official start-up of the newly constructed plant.

The facility was built through a joint venture between Pivotal LNG and NorthStar Midstream. According to the partners, JAX LNG is the first small-scale LNG facility in the U.S. with both marine and truck-loading capabilities.

In addition to serving marine and trucking companies, the JAX LNG plant is positioned to serve other industries, including rail, drilling, mining, power generation, commercial and industrial.

Currently, the facility has the capacity to produce 120,000 gallons of LNG per day and store more than 2 million gallons of LNG. There is room at the site to expand the facility and add two liquefaction trains and a second storage tank, which would increase LNG production capacity to 600,000 gallons per day and enable the storage of up to 4 million gallons. JAX LNG can use its location on the water to service its maritime customers via LNG transport vessels, the partners note.

Construction of the JAX LNG facility began in late 2016. NorthStar is owned by funds managed by Oaktree Capital Management LP.

Jared Parker, co-portfolio manager of Oaktree’s infrastructure investing strategy, states, “We believe LNG is the logical fuel choice for ships calling on ports in the United States. We are excited to be developing the infrastructure necessary to make this option available for the transportation needs of companies focused on emission reductions and meeting IMO 2020 requirements.”