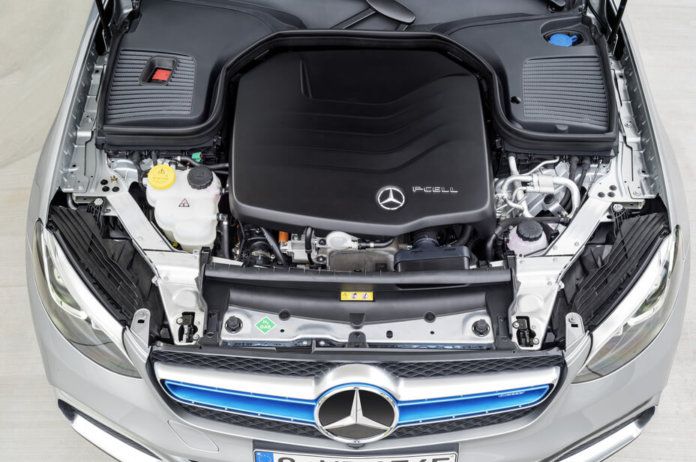 The new Mercedes-Benz GLC F-CELL, an electric model combining fuel cell and battery technology in the form of a plug-in hybrid, is set to go on sale in the U.S. by the end of 2019.

At this year’s IAA International Motor Show in Frankfurt, Germany, Mercedes-Benz presented pre-production models of the new vehicle. Under the technology designation EQ Power, the SUV is designed for everyday use but is also suited for long-distance drives, according to the automaker.

With 4.4 kg of hydrogen on board, the pre-production model produces enough energy for a range of up to 437 kilometers (roughly 294 miles) in the New European Driving Cycle (NEDC). When the vehicle runs on its lithium-ion battery, drivers will get a range of up to 49 kilometers in the NEDC. (The automaker notes that these statistics are subject to change for the U.S. market.)

“Our many years of experience with fuel cell technology pay dividends in the new GLC F- CELL: Its long electric range, short refueling times and everyday practicality of an SUV will make it the perfect vehicle,” comments Ola Källenius, member of the board of management of Daimler AG, responsible for group research and Mercedes-Benz cars development. “This is made possible by the compact construction of our fuel cell system. Another genuine world first is the combination with a large additional lithium-ion battery, which can be conveniently charged using plug-in technology.”

The automaker says EQ Power is a key part of the company’s strategy for the mobility of the future, known at Daimler as “CASE.” The four letters stand for the strategic future pillars of networking (Connected), autonomous driving (Autonomous), flexible use (Shared & Services) and electric drive systems (Electric). Between now and 2022, Daimler intends to bring out 10 battery-electric vehicles globally, with the GLC F-CELL representing an important landmark. 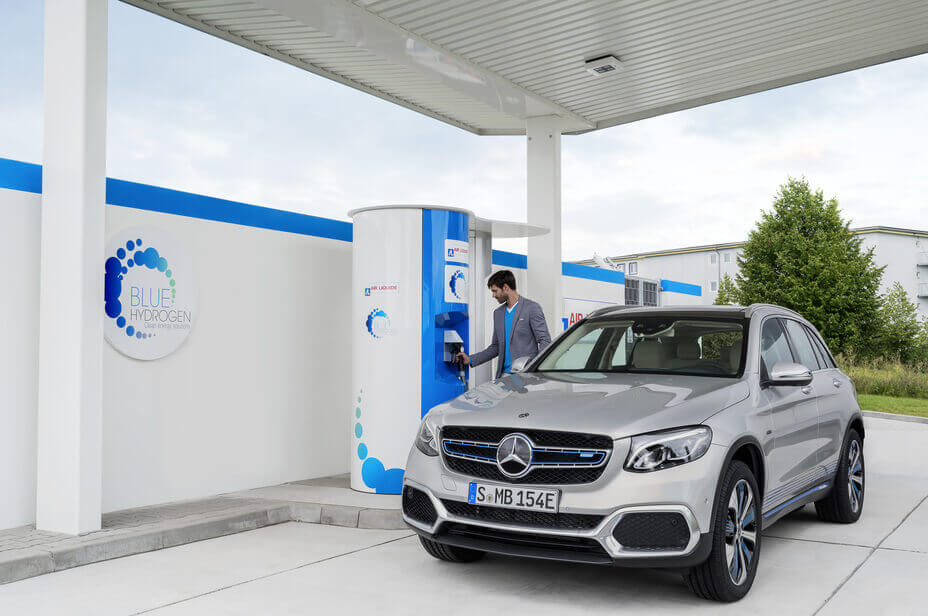 Compared with the B-Class F-CELL, which has been on the market since 2010, the overall drive system of the new vehicle offers around 40% more output, says Mercedes-Benz. The fuel cell system is around 30% more compact than before and can, for the first time, be housed entirely in the engine compartment. Also, the use of platinum in the fuel cell has been reduced by 90%. This conserves resources while lowering the system costs – with no compromises in terms of performance, according to the automaker.

The lithium-ion battery in the pre-production vehicles on show has a gross capacity of 13.8 kWh and additionally serves as an energy source for the electric motor. For the first time, it can also be charged externally using plug-in technology. Just like the drive motor, the powerful storage battery is space-savingly installed in the rear of the SUV. By means of the 7.2 kW on-board chargers, it can be conveniently charged from a standard household power socket, a wallbox or a public charging station. The charging time is around 1.5 hours if the full capacity is used, notes Mercedes-Benz.

Two carbon-fiber-encased tanks built into the vehicle floor hold around 4.4 kg of hydrogen. Thanks to globally standardized 700 bar tank technology, the supply of hydrogen can be replenished within just three minutes, which is about the same amount of time it takes to refuel a car with an internal combustion engine.

The F-CELL vehicles on show at the IAA are powered by an asynchronous machine with an output of 197 hp and a torque of 258 lb.-ft. As the electric drive requires no propeller shaft, this makes room for one of the two hydrogen tanks, and the second tank is installed under the rear seat bench.

The drive programs of the GLC F-CELL will include ECO, COMFORT and SPORT. ECO is optimized for low consumption; COMFORT is geared not only for comfort but also for ideal climate control; and SPORT optimizes the hybrid powertrain for sporty performance.

Furthermore, in HYBRID operating mode, the vehicle draws power from both energy sources. Power peaks are handled by the battery, while the fuel cell runs in the optimum efficiency range. The intelligent operating strategy means that the characteristics of both energy sources can be ideally exploited.

In F-CELL mode, the state of charge of the high-voltage battery is kept constant by the energy from the fuel cell. Driving almost exclusively on hydrogen is the ideal mode if the intention is to keep the electric range in reserve for certain driving situations.

In BATTERY mode, the GLC F-CELL runs all electrically and is powered by the high-voltage battery. The fuel cell system is not in operation; this is the ideal mode for short distances.

In CHARGE mode, charging the high-voltage battery has priority – e.g., in order to recharge the battery for the maximum overall range prior to refueling with hydrogen. This mode also creates power reserves for uphill or very dynamic driving.

In all operating modes, the system features an energy recovery function, which makes it possible to recover energy during braking or coasting and to store it in the battery.