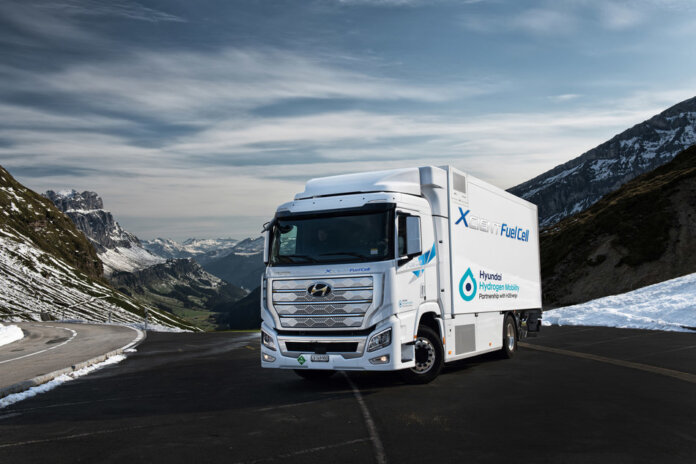 Hyundai Motor Co. has delivered the first seven units of its XCIENT Fuel Cell truck, the world’s first mass-produced fuel cell electric heavy-duty truck, to customers in Switzerland – with a total of 50 hitting the roads there this year.

The delivery of XCIENT Fuel Cell marks the official entry of Hyundai’s commercial vehicles in the European market, a touchstone for the company’s expansion into the North American and Chinese commercial markets.

“The delivery of XCIENT Fuel Cell starts a new chapter not only for Hyundai’s hydrogen push, but also the global community’s use of hydrogen as a clean energy source,” says In Cheol Lee, executive vice president and head of the commercial vehicle division at Hyundai Motor. “This delivery is just a beginning as it opens endless possibilities for clean mobility. With the successful delivery of the first XCIENT Fuel Cell trucks, we proudly announce our plan to expand beyond Europe to North America and China – where we are already making great progress.”

Production capacity of the XCIENT Fuel Cell will reach 2,000 units per year by 2021 to support its expansion into Europe, the U.S. and China as demand for clean mobility grows. The increase in capacity will be backed by a $1.3 billion investment in addition to a previously announced $6.4 billion stake in establishing a hydrogen ecosystem to support creation of a hydrogen society.

In the U.S., Hyundai is collaborating with logistics leaders to supply mass-produced fuel cell heavy-duty trucks. Hyundai revealed the fuel cell-powered HDC-6 NEPTUNE Concept Class 8 heavy-duty truck at the North American Commercial Vehicle (NACV) Show in October 2019. To back this plan, Hyundai is partnering with companies to build a complete hydrogen value chain covering everything from hydrogen production and charging stations to service and maintenance. By 2030, Hyundai expects more than 12,000 fuel cell trucks to hit U.S. roads.

To support the growing hydrogen ecosystem, Hyundai has a business case for more than 100 hydrogen fueling stations in Switzerland, which is enough not only for commercial vehicles but also passenger fuel cell electric vehicles. Likewise, Hyundai plans to act as a sector coupler in bringing various players to the hydrogen value chain.