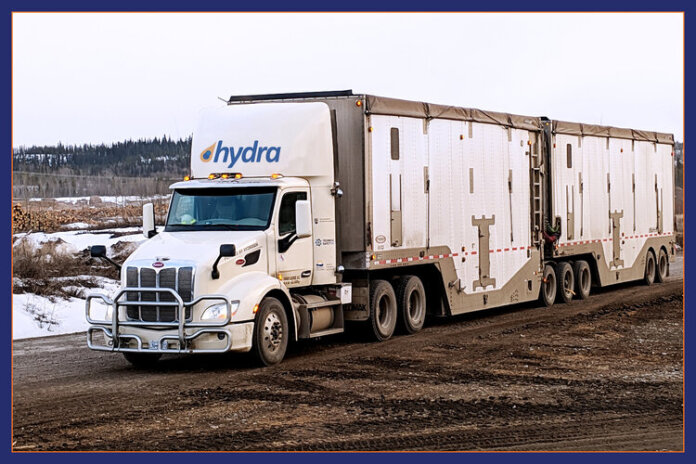 Hydra Energy, a hydrogen-as-a-service (HaaS) provider for commercial fleets, has entered a strategic partnership with Chemtrade. The long-term contract is an important factor of Hydra’s HaaS business model and includes Hydra capturing, cleaning and compressing hydrogen.

Initially, both companies are focused on one of Chemtrade’s plants in British Columbia with the potential to expand across the country. Commercial truck fleet operators with Hydra-converted semi-trucks can access green hydrogen at a fixed price, 5% below the price they typically pay for diesel. Multi-year pilots demonstrated an ability to reduce greenhouse gas (GHG) emissions up to 40%, using hydrogen-injection technology and fuel source without impacting truck performance or range. Natural gas distributors can also use the green hydrogen to meet renewable content requirements.

Hydra says its ability to deploy stranded hydrogen assets to fleet operators, who can use it to reduce their fuel costs and meet emission targets, opens up new opportunities for chemical manufacturers. The company’s HaaS model helps commercial fleets reduce costs and emissions with limited risk and no up-front investment. The company installs hydrogen-diesel co-combustion conversion kits into existing semi-trucks and provides the fueling infrastructure for the green hydrogen sourced from chemical producers like Chemtrade at no cost to fleet owners.

California’s Low-Carbon Fuel Standard fuel pathways report notes diesel fuel possesses a carbon intensity of 74.86g per megajoule of energy. While still in the process of being defined internationally, a spectrum of colors are typically used to define the carbon intensity of hydrogen, from grey on the higher side and green on the lower end of the spectrum. In Hydra’s case, the company applies a circular economy approach using hydrogen gas already vented as a by-product of manufacturing to fuel fleets. In some plant implementations, like its initial Chemtrade project, Hydra can also leverage hydropower to power its compressors, making it possible to achieve under 10.53g per megajoule – fitting within the range of both low-carbon and green hydrogen.

“Hydra enables a rapid and affordable transition to cleaner trucking by turning one’s waste into another’s valuable resource,” says Jessica Verhagen, COO of Hydra Energy. “According to a report by Navius Research, Hydra’s model can be expanded to power tens of thousands of trucks and reduce emissions up to six megatons per year in Canada alone. That compares to the same amount of greenhouse gas reductions that the Canadian government forecasts for electric vehicle adoption by 2030.”

Global transportation is currently responsible for 16% of GHG emissions, with a significant portion from road transport. In Canada, 10.5% of these emissions come from freight transportation. In the U.S, this number increases to 23% stemming from medium- and heavy-duty trucks.

The flagship Hydra-Chemtrade commercial project will break ground this year, with gas expected to be flowing in 2022.