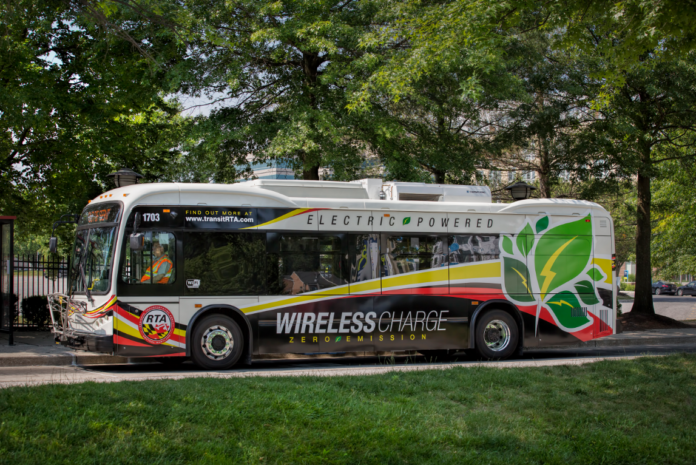 According to Momentum, this project is the result of a cooperative effort among Howard County, Regional Transportation Agency of Central Maryland (RTA), Maryland Transit Administration (MTA), BYD North America, Center for Transportation and the Environment (CTE), and GGP.

As reported, the project team recently completed the installation of an inductive charging system at The Mall in Columbia, a portfolio property of GGP, an S&P 500 company that owns, manages, leases and redevelops high-quality retail properties throughout the U.S. Three new electric buses will be wirelessly charged when they make routine stops at The Mall.

Momentum says its charger operates at efficiencies that exceed many conductive chargers – and does not require a chilling system, nor the regular expensive maintenance of an overhead charging system. Perhaps most importantly, the system is less expensive to install and operate, the company notes.

The Federal Department of Transportation provided funding through the MTA to Howard County in order to support the purchase of three 35-foot electric buses from BYD Coach and Bus, as well as the inductive charging equipment from Momentum Dynamics.

“Howard County and its partners continue to lead in proving that innovative public transit technology can be implemented as part of the county’s ongoing efforts to develop downtown Columbia,” says Howard County Executive Allan H. Kittleman. “We know that efficient, innovative and reliable public transit will be one of the cornerstones of downtown Columbia’s success.”

David Cookson, planning manager at the Howard County Office of Transportation, says, “We are extremely excited to be able to help reduce carbon emissions in the county through the purchase of electric buses and the integration of fully wireless charging that operates in snow, ice and rain completely autonomously to aid in our goal of providing high-quality public transit to our residents and visitors.”

Macy Neshati, a 35-year veteran of the transportation industry and senior vice president of BYD Heavy Industries, has long been an advocate for advanced technology and alternative fuels. Recently, the Federal Transit Administration (FTA) through National Research Board, a division of the U.S. National Research Council, appointed Neshati to serve on its transit research analysis committee.

“The more we can showcase the success and efficacy of new technologies that directly benefit communities and the environment, the more communities will join Howard County in taking this important step,” Neshati says.

Momentum Dynamics has developed a 200 kW wireless charging system for the municipal transit market. The Howard County 50 kW system includes a transmitter installed in the pavement and a receiver installed on the underside of the bus. Momentum’s technology automatically charges the bus’ batteries while the bus is parked over the transmitter.

According to Momentum CEO Andy Daga, “This project will demonstrate the benefit of fast automatic charging along bus routes. We’ve learned that many people think that wireless charging is years away and inherently inefficient. In fact, wireless charging is available today, and it can be more efficient than comparable conductive chargers.”

Mark Pritchard, general manager of RTA, comments, “From an operating standpoint, it is a tremendous opportunity for our bus operators and maintenance technician staff to learn firsthand about the differences between electric battery-powered vehicles compared to conventional technology. The initial feedback from bus operator testing to date is very positive about both how quiet and smoothly the vehicles operate. Maintenance staff are pleased with the simplicity and lack of complexity compared to internal combustion engines.”

Local, state and federal agencies have recognized that autonomous wireless charging will accelerate the adoption of all types of electrified vehicles, Momentum explains. Electric buses and automatic wireless charging support the objectives of legislation and regulations that are aimed at the reduction of vehicle-generated air pollution and carbon emissions.

Elizabeth Kreider, former director of the MTA’s Office of Local Support, says, “This project is one in which we have long been interested because there are direct health benefits with vehicle electrification. In addition, projects such as the one in Howard County aid the state in learning and understanding how this technology can help to reduce fuel and maintenance costs for municipal transit fleets.”

CTE, as project manager and technical consultant to Howard County, manages the day-to-day activity of the project team and has provided third-party technical analysis, modeling and simulation throughout the life of the project. As a non-governmental nonprofit organization, it works to support its members in association with partnerships with federal agencies, including the FTA and the U.S. Department of Energy, as well as transit agencies throughout the U.S.

Upon deployment, CTE will collect operations and maintenance data over a two-year reporting period. The data will be used to generate a series of key performance indicators, which will provide Howard County, the FTA and the industry with information regarding the overall impact of the wirelessly charged electric buses.

A new breakthrough in nano lubrication is adding fuel mileage to trucks and buses. A breakthrough in infusing motor oils with microscopic nano particles which serve to fill in and smooth the millions of cracks and crevasses of an internal combustion engine, reduce friction, heat and emissions.

The diesel engines are performing better, with an increase in gas mileage from 2% in new engines to cases of older engines of 8%, with a likewise reduction in emissions.