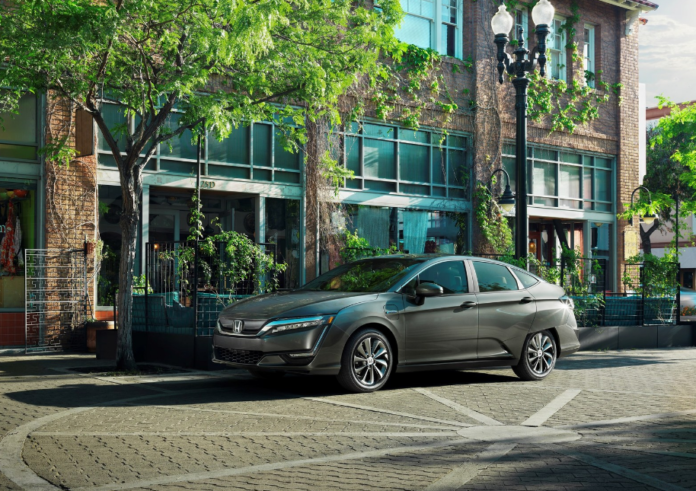 Honda has announced the arrival of the 2017 Honda Clarity Electric sedan at select dealerships in California and Oregon.

The automaker is offering the battery-electric vehicle for $269 per month for 36 months with $1,730 due at signing. As part of the deal, lessees will receive an allowance of 20,000 miles per year and 24/7 roadside assistance. The terms reflect the federal tax credit of $7,500, Honda notes.

In addition, if they apply, California and Oregon customers may qualify for their state’s rebates of $2,500 once they become available.

The Clarity Electric sedan is powered by a 161-hp (120 kW) electric motor producing 221 lb.-ft. of torque and drawing power from a 25.5-kWh lithium-ion battery pack. Honda says the vehicle can be fully charged in just over three hours at 240 V, and when using DC fast charging with the SAE Combined Charging System, it can achieve an 80% charge in just 30 minutes.

The Clarity Electric has an Environmental Protection Agency (EPA) fuel economy rating of 126/103/114 MPGe (city/highway/combined), and an EPA range rating of 89 miles on a full charge.

The Clarity Electric is part of Honda’s Clarity series, which includes the Clarity Fuel Cell, launched in December 2016, and the Clarity Plug-in Hybrid, launching nationally later this year.

The Clarity series is part of the Honda Electrification Initiative that sees Honda expand the number and types of electrified vehicles in its product lineup. This initiative also includes a new dedicated hybrid car launching next year and the expanded application of Honda’s two-motor hybrid and plug-in hybrid powertrains to multiple car and light truck models in the future. This initiative contributes to Honda’s intention to have two-thirds of its global automobile sales come from electrified vehicles by 2030.