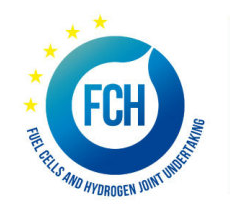 As reported, 60 of Symbio’s Renault Kangoo ZE-H2 range-extended fuel cell vans have been deployed in the U.K. and France, supporting the development of a network of hydrogen refueling stations in those markets.

In addition, Daimler has deployed 40 B-Class F-CELL vehicles under H2ME in Germany. Thanks to the 700-bar, high-pressure fuel-tank system, the car has a long operating range of around 400 kilometers and can be refueled in less than three minutes. The vehicle’s electric motor develops an output of 100 kW and boasts a torque of 290 Nm.

To illustrate, last September, CETUP’s Kangoo ZE-H2 equipped by Symbio broke a range record by covering 367 kilometers at once with a fully loaded battery and a full hydrogen tank.

Bringing together eight European countries in the largest-scale project of its kind, H2ME intends to do the following:

In total, more than 1,400 FCEVs will be deployed as part of the H2ME project throughout the U.K., France, Germany, the Netherlands and Scandinavia. The aim is to increase the number of FCEVs operating on Europe’s roads to build on the strong networks of hydrogen refueling stations created by H2ME and other initiatives across the European Union.

“Symbio is proud to be part of the hydrogen momentum in Europe and contribute to a low-carbon economy by facilitating the deployment of 100 percent zero-emission and 100 percent electric vehicles,” says Pierre-Yves Le-Berre, vice president of Symbio. “Electric vehicles integrated with Symbio’s range extender are able to reduce air pollution in urban areas. Our ambition is to equip all urban delivery centers with our vehicles to guarantee the absence of harmful emissions, as well as address new market trends and regulations. For instance, if a delivery center used a Renault Kangoo equipped with our range extender, driving 200 kilometers a day in Paris, it would remove the carbon emissions of 20 private vehicles.”

“Vehicles such as the B-Class F-CELL and the Citaro FuelCELL-Hybrid urban bus have covered altogether more than 12 million kilometres to date, proving the market readiness of this powertrain,” says Georg Frank, senior manager of fuel cell advanced engineering and H2-infrastructure at Daimler AG. “Now we strongly continue to pursue our goal of bringing the next-generation fuel cell electric vehicles, based on the Mercedes-Benz GLC, to the market.

“But the big breakthrough of electric mobility with fuel cell depends on more than just the factor ‘car’: it is ultimately the combination of an attractive product offer, infrastructure, services, and not least, public support. The last hurdles we will have to overcome in intensive cross-industry and cross-border teamwork – H2ME is a very good example of it.”