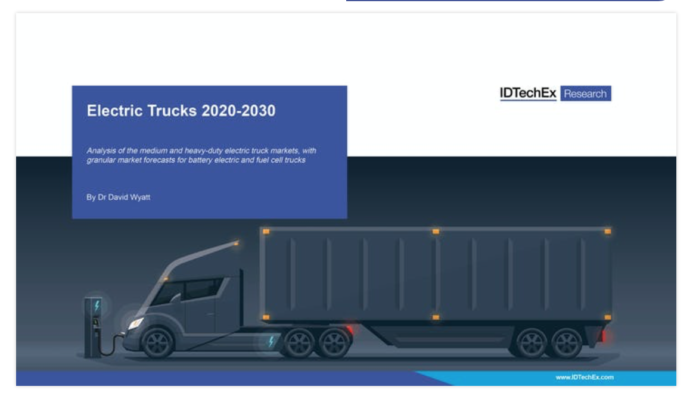 Due to the high amounts of greenhouse gases being emitted from vehicles, the federal and state governments in the U.S. are stepping up efforts to make transportation cleaner, according to IDTechEx’s recent Electric Trucks 2020-2030 report.

Since the exit of the nation from the Paris Climate Change Agreement, 23 states, along with the District of Columbia, have set strict GHG emission reduction targets. In turn, the revenue generated in the U.S. electric truck market, which was $211.5 million in 2019, is projected to increase to $30,335.3 million in 2030, at a CAGR of 58.2% between 2020 and 2030. Additionally, the government in California, which is the largest user of electric trucks in the nation, is providing $12 million to $20 million annually until 2030 for the purchase of these automobiles.

In 2030, the battery electric vehicle (BEV) category is expected to dominate the U.S. electric truck market, on account of government support that encourages the adoption of full-electric trucks. Moreover, with a decline in battery prices and increase in the life and energy density of batteries, the demand for BEVs could rise further.

Heavy-duty trucks would witness the highest CAGR in the U.S. electric truck market, of 103.2%, in terms of value, during the forecast period. This is ascribed to the rising demand for freight services as a result of the swift growth in the e-commerce industry. Seeing the demand and the supportive government regulations for electric vehicles, trucking firms are focusing on procuring electric heavy-duty vehicles for their fleets.

In the coming years, the fastest growth in the U.S. electric truck market would be experienced by the >500 miles division, due to the rising preference for long-range trucks that have almost zero emissions. To cater to the requirement, truck manufacturers are stepping up efforts to offer long-haul variants with hydrogen fuel cells.

In 2019, the logistics classification generated the highest revenue in the U.S. electric truck market, and the situation will likely be the same in the coming years. This is attributed to the rising demand for logistics services on account of expanding e-commerce, retail and manufacturing in the nation.