Fuel Fact Check: School buses
Claim: Greenhouse-gas (GHG) emissions are the only set of emissions to worry about.

According to the U.S. Environmental Protection Agency (EPA), greenhouse gases, which include carbon dioxide, methane, nitrous oxide, methane and fluorinated gases, are gases that trap heat in the atmosphere. While each contributes to climate change, emissions like nitrogen oxides (NOx), carbon monoxide and particulate matter (PM) also pose a great risk to human health and air quality. One of the greatest ways to reduce these harmful emissions is to transition school bus fleets to cleaner, safer fuel sources.

Nitrogen Oxides: The Biggest Challenge to Air Quality in the U.S.

NOx are highly reactive gases that are regulated by the U.S. federal government due to their harm to health and environment. They trigger long-term health problems, such as asthma, bronchitis and other respiratory issues, especially in the developing lungs of children. Over the years, the EPA has set tougher emissions standards on NOx to limit its exposure.

The primary source of NOx is motor vehicles. According to a University of California Riverside study, diesel-fueled medium- and heavy-duty vehicles, including school buses, are the No. 1 source of NOx emissions in almost every single metropolitan region in the U.S.

Recent research proves propane school buses, which are substantially lower in NOx than conventional fuels, are safer for the kids riding in them and the communities in which they drive. According to a West Virginia University study released this year, propane school buses reduce NOx by at least 95% compared with clean diesel. By reducing this toxic chemical, students may perform better inside the classroom.

School buses running on propane significantly reduce NOx, which is a focal point for the California Air Resources Board (CARB). It aims to have emission standards that result in a 90% reduction in NOx. Propane-fueled buses emit fewer tailpipe emissions than what is allowed under the strict standards of CARB.

While cleaner diesel engines available today reduce carbon monoxide more than propane, propane has been shown to reduce CO2 in the stop-and-go duty cycle of a school bus. In addition, clean diesel is cleaner by complication (complex and costly diesel emission systems), whereas propane is cleaner by its very composition. Propane autogas is a non-toxic, non-carcinogenic and non-corrosive fuel classified as a non-contaminant by the EPA.

Carbon monoxides and carbon dioxides are bad for the environment and humans, as they temporarily block oxygen absorption until fresh air is inhaled. According to the EPA, as much as 95% of all carbon monoxide emissions in cities may come from motor vehicle exhaust.

The EPA also regulates PM, which can create serious lung and bronchial health problems. PM is the soot you see from vehicle exhaust, which is known to aggravate asthma and is identified as a carcinogen by the World Health Organization. With both propane and modern diesel school buses, students aren’t exposed to that soot because both fuels virtually eliminate it. The major difference is that unlike modern diesel, propane eliminates it without adding maintenance burdens and extra costs to the end-user.

Bottom line? Reducing all emission constituents is important, and propane autogas has been able to do that across the board, with an increased emphasis on NOx.

Ryan Zic is the vice president of school bus sales for ROUSH CleanTech, a provider of alternative fuel vehicle technology. He can be reached at ryan.zic@roush.com or 800.59.ROUSH. 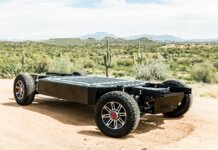 Definitely going to consider emission reductions, especially past the claim of NOx reductions.

Propane is not a great alt fuel in terms of reducing co2 (which is mentioned in this op-ed). Look up “LCFS Carbon intensity scale”