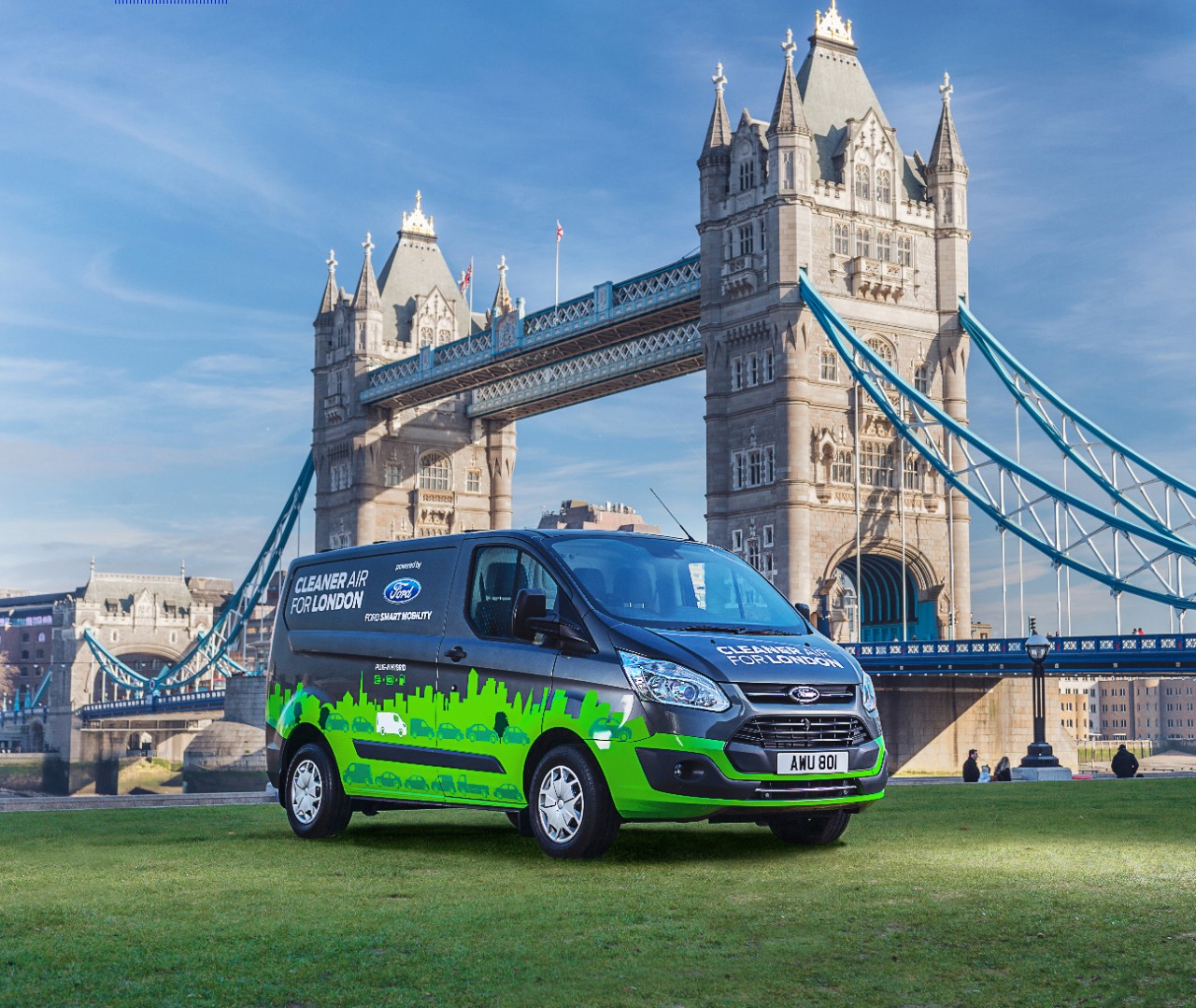 Ford Motor Co. is launching a major project designed to help improve air quality as the automaker accelerates its electrification plans with 13 new global electrified vehicles (EVs) scheduled for introduction in the next five years.

The project, supported by Transport for London, features a 12-month trial of 20 new plug-in hybrid (PHEV) Transit Custom vans that reduce local emissions by running solely on electric power for the majority of city trips, such as deliveries or maintenance work.

Commercial vehicles in London make 280,000 journeys on a typical weekday, traveling a total distance of 8 million miles. Vans represent 75% of peak freight traffic, with over 7,000 vehicles per hour driving at peak times in central London alone.

Ford will provide the 20 PHEV Transits to a range of commercial fleets across London, including Transport for London’s fleet, to explore how such vans can contribute to cleaner air targets, while also boosting productivity for operators in urban conditions, the toughest working environment for vehicles. As reported, the project is supported financially by the U.K. government-funded Advanced Propulsion Centre.

“Ford is the No. 1 commercial vehicle brand in Europe, and it’s now going electric. Teaming up with our London partners, we will also be able to trial software and telematics with enormous potential to reduce emissions and costs in the city,” says Jim Farley, chairman and CEO for Ford of Europe. “This new type of partnership demonstrates our evolution to both an auto and mobility company. We have lots of work to do, but everyone is so energized by this breakthrough opportunity.”

Ford says it is focusing its EV plan on its areas of strength – electrifying its most popular, high-volume commercial vehicles, trucks, SUVs and performance vehicles to make them even more capable, productive and fun to drive, plus more fuel efficient.

Scheduled to launch in autumn this year, the fleet trial is part of Ford’s commitment to working with major cities around the world to tackle their local transport challenges and help people and goods move more easily.

“The freight sector’s transition to ultra-low-emission vehicles is central to cleaning up London’s toxic air,” says Sadiq Khan, Mayor of London. “Transport for London continues to lead by example by increasing the number of its own vehicles that are electric and will find the data from these trials an invaluable resource for the LoCITY program, which encourages the uptake of low-emission commercial transport.”

According to the automaker, the Transit Custom PHEV vans in the London trial are an advanced design that allows them to be charged with mains electricity for zero-emission journeys, while featuring an efficient onboard combustion engine for extended range when longer trips are required. Ford says it is the first volume manufacturer to offer PHEV technology in this segment of the van market.

The trial fleet will operate in everyday use across a cross-section of city-based businesses, using a Ford telematics system to collect data on the vehicles’ financial, operational and environmental performance to help understand how the benefits of electrified vehicles can be maximized.

Development of the 20 Transit Custom PHEV fleet trial vehicles has been supported by a grant from the Advanced Propulsion Centre for 4.7 million British pounds. The vans are being designed and engineered at Ford’s Dunton, U.K., technical center and at Prodrive Advanced Technology in Banbury, U.K., with program support from Revolve Technologies.

“This new project, with nearly 5 million [British pounds] of government money, has secured work here in the U.K. and demonstrates our commitment to not only reducing carbon emissions, but to work with industry on developing next-generation technology that will make a real difference to people’s lives,” says Nick Hurd, Climate Change and Industry Minister. “This government will continue to work with the auto sector as we develop a comprehensive Industrial Strategy that will increase productivity, create high-skilled jobs and ensure sustainable economic growth.”

The Transit Custom PHEV van is planned for commercial introduction in 2019 – part of the automaker’s $4.5 billion investment in EVs by 2020 as it expands to be an auto and a mobility company, including leading in electrified and autonomous vehicles and providing new mobility solutions.

As reported, the Transit Custom PHEV is just one of 13 new global electrified vehicles Ford is launching in the next five years. This total includes a fully electric SUV with an estimated range of at least 300 miles, a high-volume autonomous hybrid vehicle designed for commercial ride hailing or ride sharing to debut in North America in 2021, and a hybrid version of the iconic Mustang sports car. Ford also has a memorandum of understanding with several other automakers to create the highest-powered charging network for EVs in Europe.